In January 1999, the Mitsubishi European Design Centre, directed by Akinori Nakanishi, asked STOLA S.p.a. to create two exterior model proposals plus one interior in Hard Material for the future Colt series.
This first project for the important Japanese carmaker was the result of several previous meetings at their headquarters in Trebur ,Germany.
Meetings took place to explain the technical advantages of the hard models, in particular in see-through format. Our contacts were Akinori Nakanishi and Gert Hildebrand.
Over the following years many other models and show cars would be buit for Mitsubishi.
On these occasions we will meet Osamu Tsuchiya, Hans J Storck, Satoru Tsujimoto, Abe Hiroyuki, Abe Taketoshi, Morel Thomas, Richard Plavetch, Yamada Shuji, Omer Halihodzic and we will meet again Peter Arcadipane and Olivier Boulay. 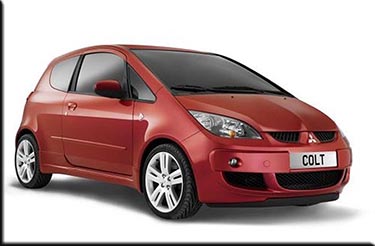 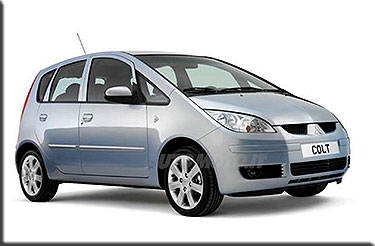 Rivoli January 1999: In Stola s.p.a. two style models of the Mitsubishi Colt in 3 and 5-door versions are made. Work done directly for the Japanese style center whose global director is Olivier Boulay. 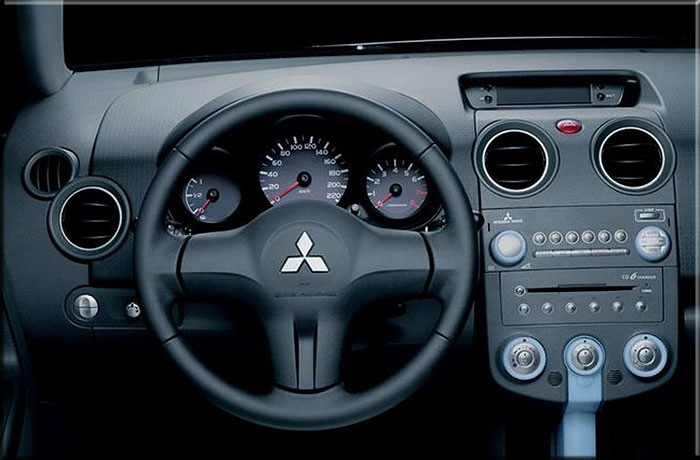 Rivoli January 1999: In Stola s.p.a. the style model of the interior of the Mitsubishi Colt is realized. Work done directly for the Japanese style center whose global director is Olivier Boulay. 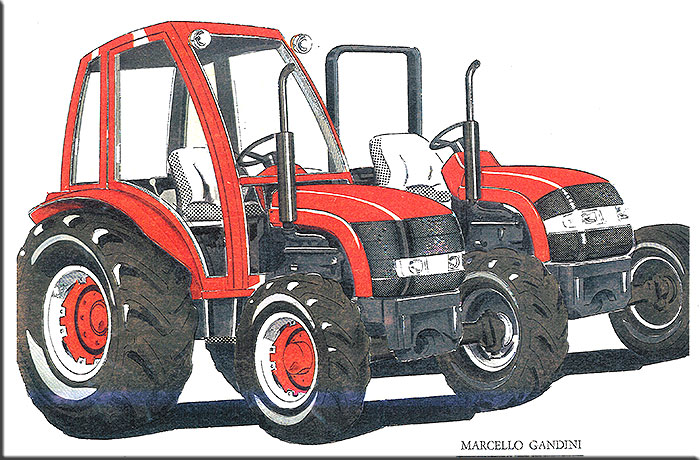 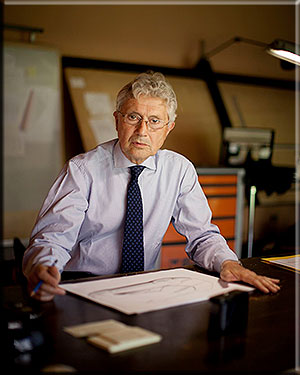 Marcello GandiniAlso in January 1999, the Engineer Claude Nahum, close to the Turkish Koc family, was in negotiations for the acquisition of the American manufacturere,Case.
Stola was asked for a complete project with a styling models for a new tractor.
The style was commissioned by Marcello Gandini, at the same time the macro engineering feasibility began.
Negotiations were intense, but in May of the same year it emerged that it would New Holland that would buy Case and the project was stopped.
The tractor was memorable in STOLA s.p.a. in particular for the longest conference call made between Turin and Geneva by Tiziano Novo and Claude Nahum started at 10 in the morning and ending at 4 am the next day.

In February 1999 Roberto Stola shared with his management team the convenience of having a small and independent engineering company to support the technical offices of Stola s.p.a.
The need was largely due to the high design workload for Brazil, and also with a view to future commitments for complete projects, by then almost secured, with Maserati and Alfa Romeo.
Roberto Stola knew Matteo Colasanto well, he was the owner of Tecnocars in Corso Unione Sovietica, Turin, which had a workforce of around 15 designers.
Together they reached an agreement allowing Stola s.p.a. to become the owner of Tecnocars with Colasanto continuing with it’s management.
Tecnocars proved to be an excellent idea, and thanks to the integration of the Technical Director of Stola, Gottardo Bustreo and all his Project Managers, would go on to prove to be very profitable in terms of efficiency given the small and slender structure of the company.
Some Stola designers would also go on to work as Team Leaders within Tecnocars, as in the 2002 BMPV Idea Brazil project, with Stefano Marchisio and Carlo Carena.
Gianfranco Morlacchi was tasked with integrating the Tecnocars systems into the infrastructure of the Stola network, allowing connections to the relevant customers as well as to align and train staff with the design and quality methodologies used in Stola.
Tecnocars went on to be part of the sale to Global Industriale on July 26, 2004 being 100% owned by Stola s.p.a.

In March 1999, STOLA S.p.a. representative for Japan, Mitsushi Yabe, produced a hard see-through style model for the second series of the Subaru Forester.
For the occasion, with a view to 100% understanding the needs of a new customer, the head of the style model department Stefano Ardagna met with the designers at their Style Centre in Ota City, Japan.
Among the people met in Rivoli and Ota City, Hiroyuki Baba and Rhor Emmanuel are remembered.

The Turin Motor Show by then was becoming an annual fixture, a moment of encounter and cordiality with all the customers in the concept, master, cubing engineering and pre-production prototypes sectors.
For the April 2000 appointment, the Stolas decide to rely on Marcello Gandini for the construction of an open door model in the autumn of 1999
An important theme, reviewing the Lancia Stratos, thirty years after the presentation by the same hand at the 1970 Turin Motor Show. 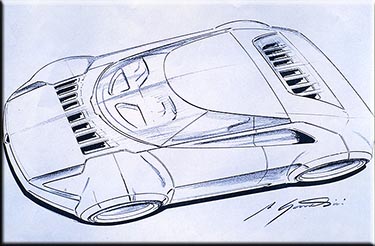 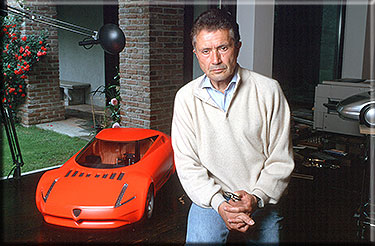 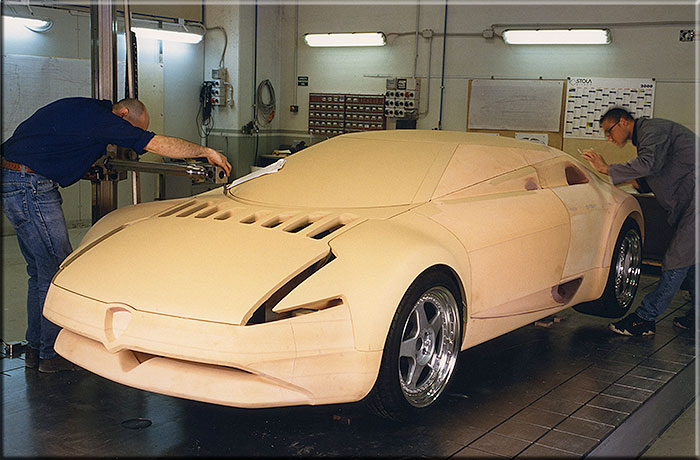 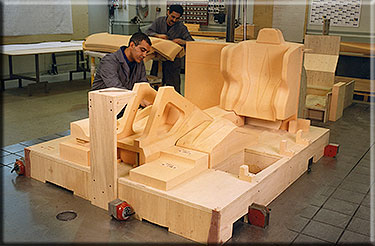 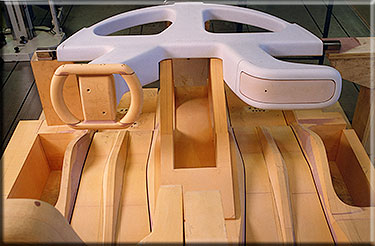 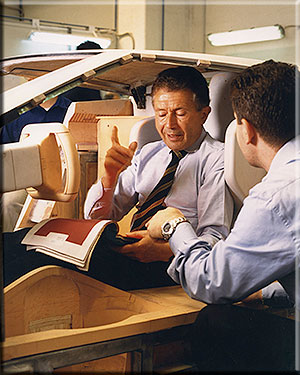 Marcello Gandini had carte blanche, in four months the team of modellers created a formidable and yet feasible model.
For the record, to begin with, the S81 model was Lancia branded on the front with the customary shield, however, a few days before painting the top management of Fiat asked not to use their logo. I proposed to use the rhombus emblem of STOLA spa, but the family asked Marcello Gandini to apply his stylized MG acronym of his name.
A very painful decision both for Stola and Gandini and for all the workers involved in the project. 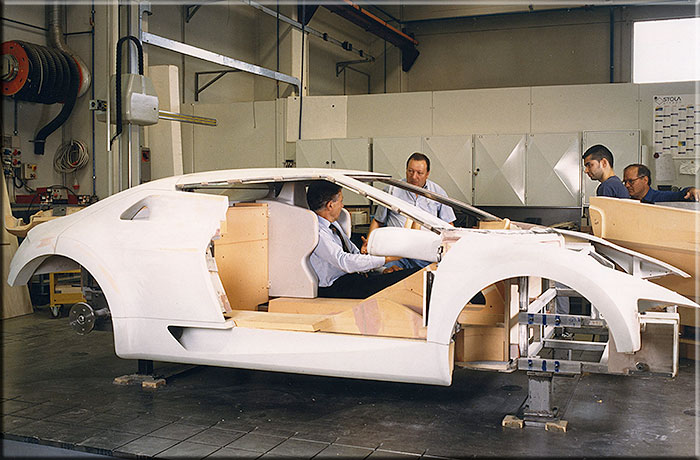 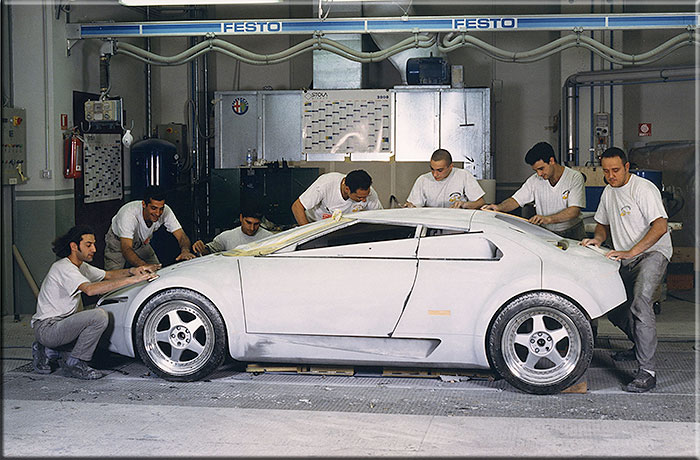 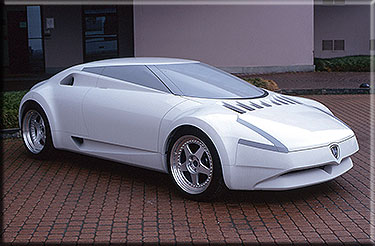 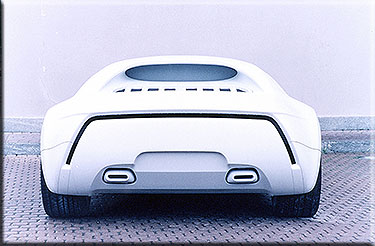 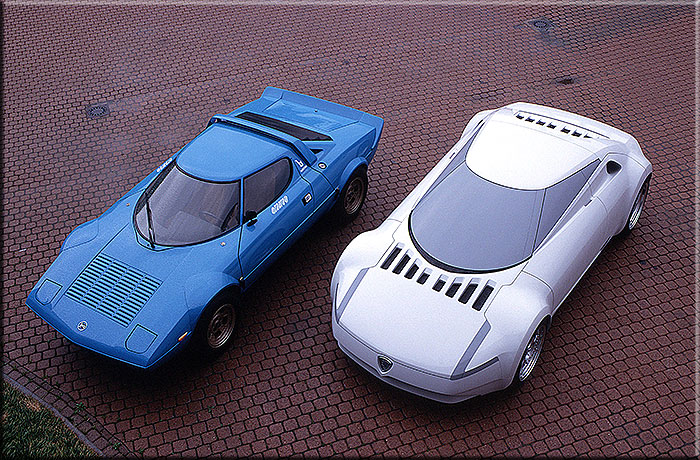 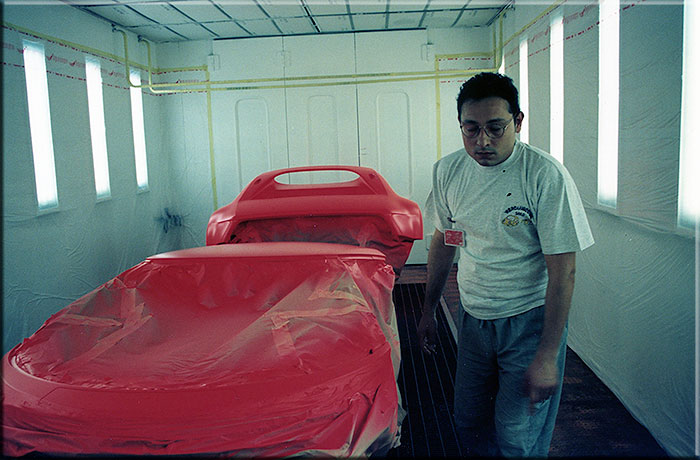 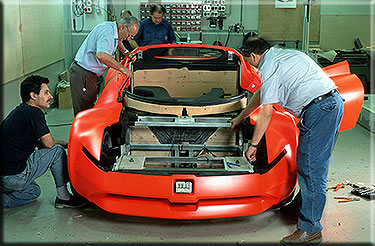 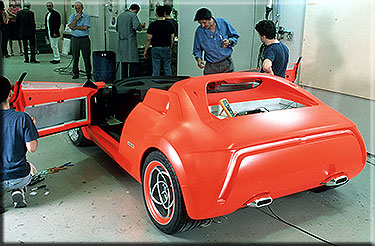 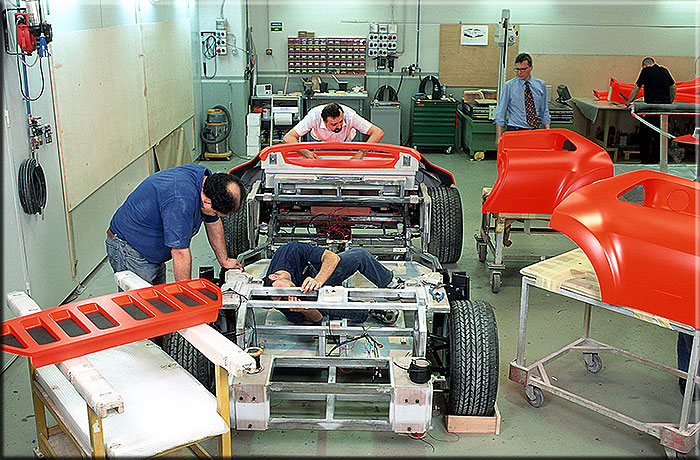 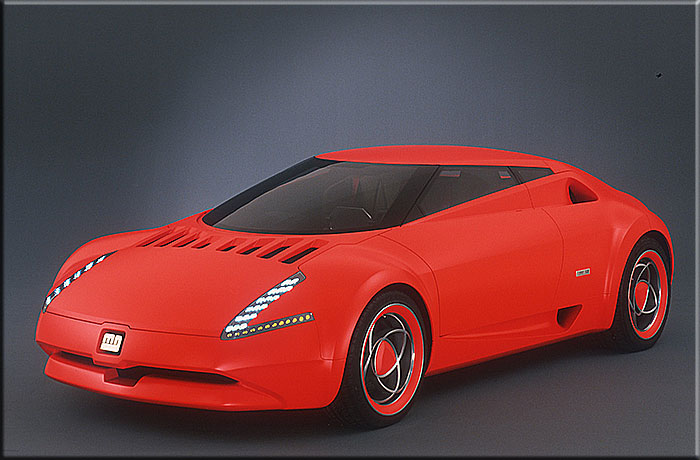 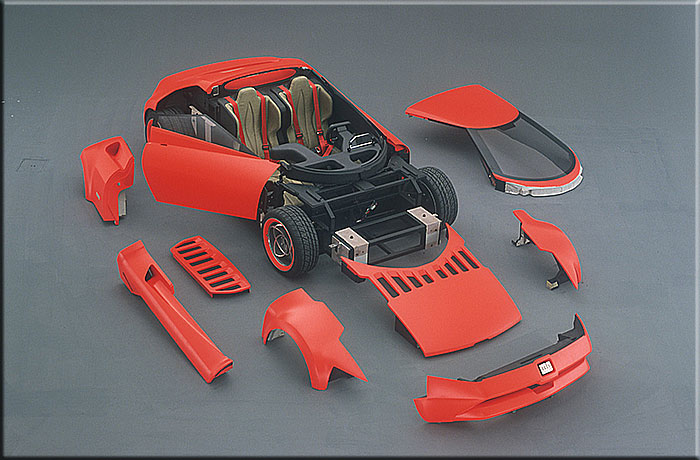 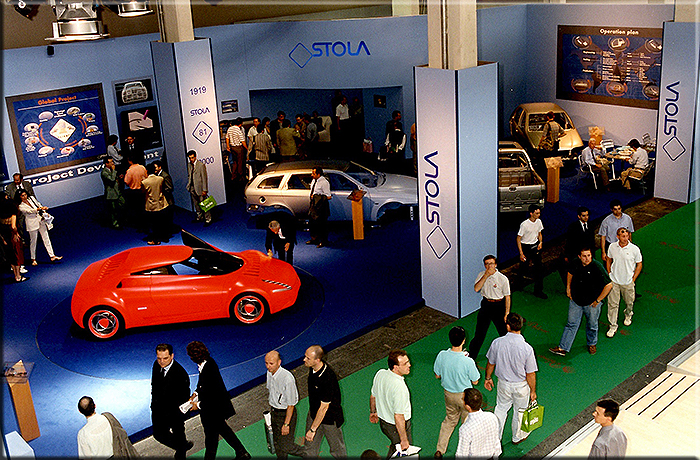 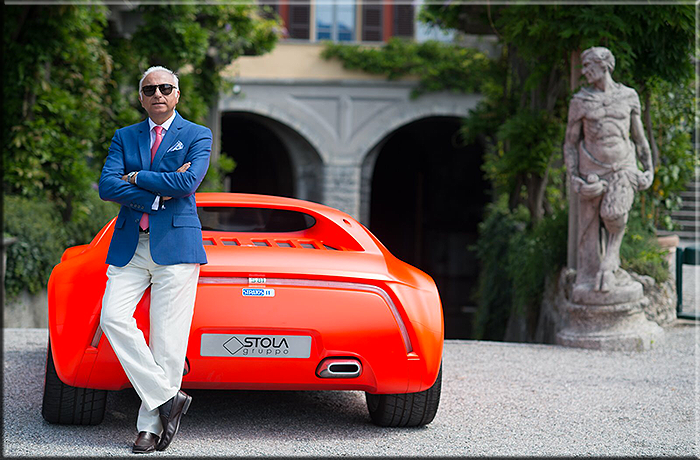 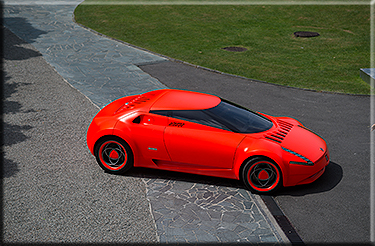 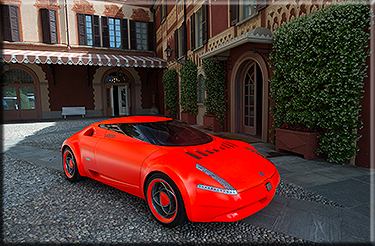 Cernobbio 2009. The Stola S81 owned by the collector Corrado Lopresto photographed in the park of the Hotel Villa d'Este.

An anecdote that is worth remembering was that at one point, in order to honor the city of Turin, Roberto Stola proposed to apply a graphic representing the Mole Antonelliana, iconic symbol of the city.

In parallel with the work of the S 81 and given the great esteem of Stola for Marcello Gandini, once again he was asked for his own vision for a hypothetical new Iveco truck.
In July 2000, the drawings presented by Roberto and Alfredo Stola to Fiat to engineer Paolo Cantarella in his Lingotto office. 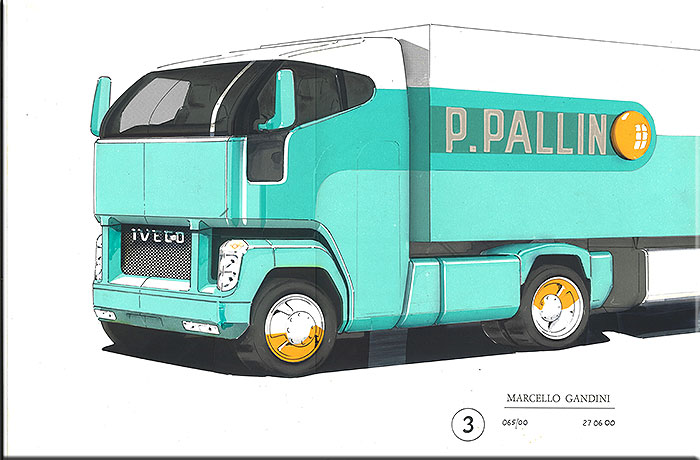 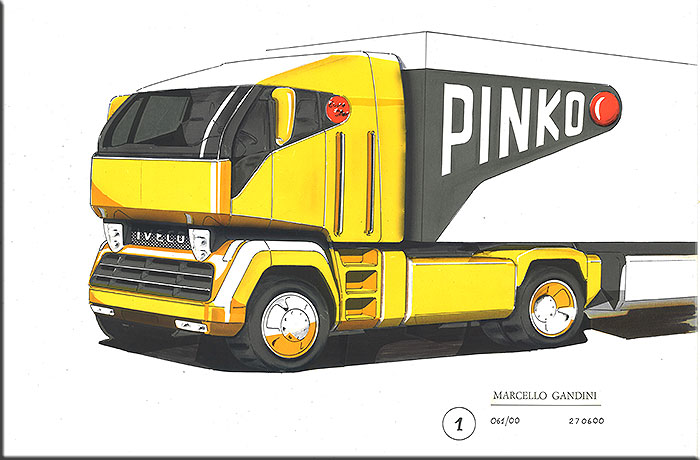 Turin 27 June 2000. the drawings of Marcello Gandini in his vision of a new Iveco engine.