February 1994 the first drawing of the Tipo 932 made by Walter De Silva.

n October 1994, Stola s.p.a worked at the Alfa Romeo Style Center in Arese to support their stylists, directed by Walter De Silva.
The goal of Alfa Romeo designers Maurer Sbignew, Wolfgang Egger, Antonio Rosti, and Vincenzo Ferreri, was to create the first exterior and interior styling models for a car inspired by the historic 1954 Giulietta. 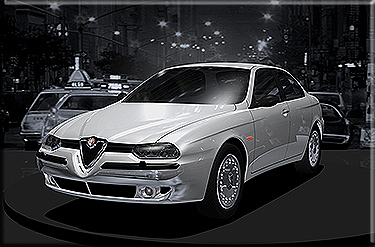 A suggestive image of the definitive class C mathematics created by the Alfa Romeo Style Center in AreseThe task for the Stola technicians of the Lombardia headquarters at Cinisello Balsamo was to provide in parallel the macro feasibility and class C surfaces necessary for the milling of the two models.
Messrs. Rabaioli, Morlacchi, Castiglioni and Di Benedetto, together with other designers and mathematicians, would reside in Arese for over two months working side by side with the Alfa Romeo team.
The project was the Type 932, known as Giulietta by all involved.
Following the approval of the first two styling models, both milled in Arese, the necessary model definition and refinement work then moved to the Stola model shop in Rivoli.
First, a see-through exterior style model was created with the necessary modifications which was then followed by the interior.
At the beginning of February 1995, Walter De Silva unexpectedly requested Stefano Ardagna’s modelling team to heavily modify the body side just a few days before the presentation to the CEO of Fiat Auto, Paolo Cantarella.
From his intuition, the distinctive character of the type 932 was born; the side shoulder would no longer be continuous but only present on the front and rear wings with a total interruption on the two doors.
The presentation to Fiat top management was an extraordinary success and lead to the immediate decision to start all work with the aim of having a “start of production” no later than 1997.

Summary table of the Stola design.Given the design experience gained in previous years with the Lancia Kappa, the Ferrari 550 Maranello and the new Alfa Romeo 166, which was work was in progress at the time, the Fiat managers decided to entrust the entire project to the Stola family company and their engineering department headed by Gottardo Bustreo since 1991.
He was also personally commissioned by Roberto Stola to carry out the project management activities, immediately sensing its strategic importance for the company; an unusual dual function, which would prove immediately effective.
Bustreo took advantage of the work of the managers of the technical offices Carlo Mantovani for class A mathematics, Carlo Besana for the design of body and mobile parts and Da Re.
For Stola,Tipo 932 represents a real turning point, given the importance that Fiat Auto attached to this sedan segment.
At the beginning of 1995, following the scan of the definitive exterior and interior styling models, the Stola surfacing department began the class A mathematics supported by their feasibility colleagues and Alfa Romeo stylists.
The final objective of the work was the construction of two mathematical verification master models for the validation of all surfaces.
Gottardo Bustreo liaised with Alfa Romeo's Project Manager Renato Pasquali for almost three years. 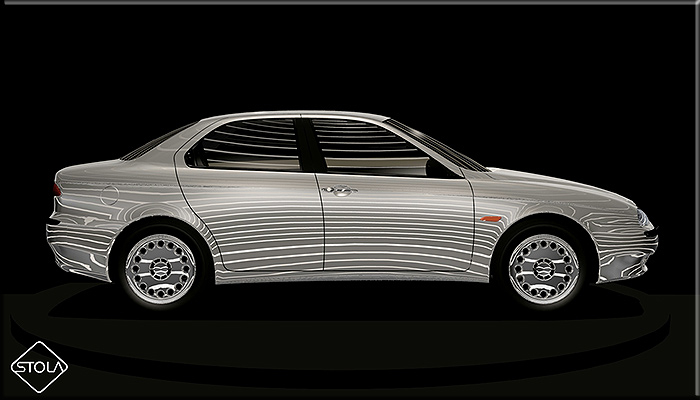 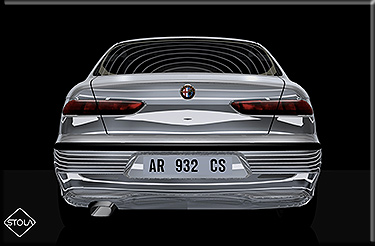 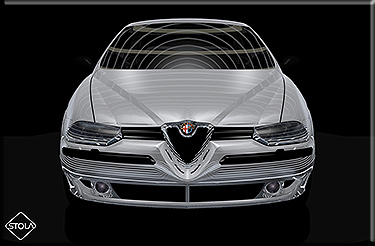 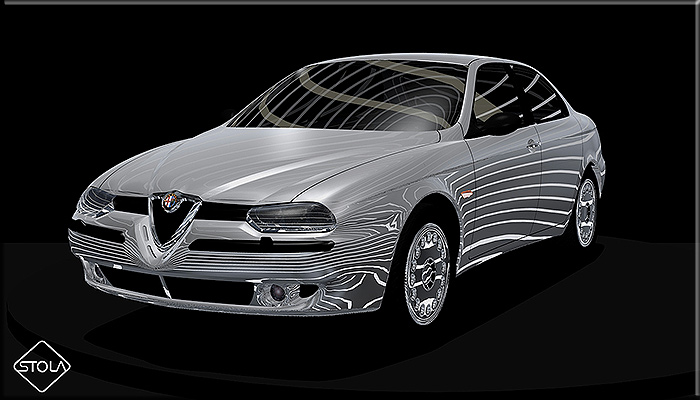 The studies for class A mathematics carried out by Team Stola under the supervision of the
designers of the Alfa Romeo Style Center in Arese. 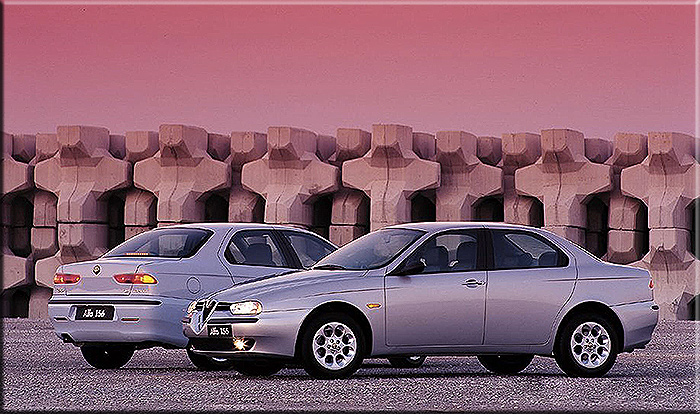 Official photo of the Alfa Romeo 156.

The definitive name of the Type 932 would be Alfa Romeo 156, with the official presentation taking place in September 1997 at the Frankfurt motor show.
It became a truly extraordinary success, to the point that in the first 4 months following the presentation it went onto collect over 90,000 orders.
At the end of 1997 this sedan went on to win the most prestigious of the specialized press awards: Car of the Year 1998.
Stola s.p.a. were also be involved on this model for the Gazzella dei Carabinieri and Pantera della Polizia versions, both full of modifications for their specific uses. 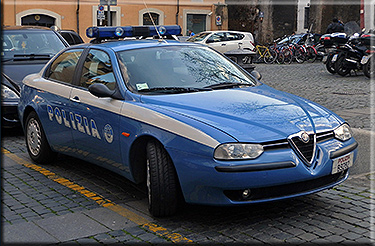 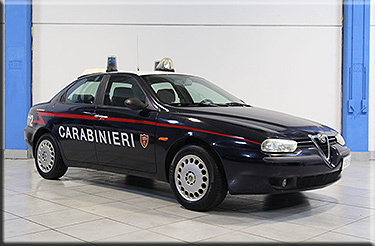 January 1998, the versions of the 156 Carabinieri and Polizia have different design variations compared to the normal production ones, all made in Stola s.p.a. 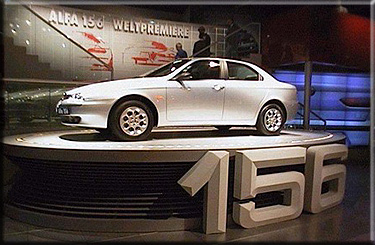 September1997. Official presentation of the 156 at the Frankfurt Motor Show.All 156’s were produced at the Alfa Romeo factory in Pomigliano d'Arco, becoming one of the biscione brand’s greatest sales successes in history.
Around 680,000 units of all versions went on to be produced.
In terms of style, it is certainly the masterpiece project of Walter De Silva in his time at the Alfa Romeo Style Center, and perhaps of his whole career ... 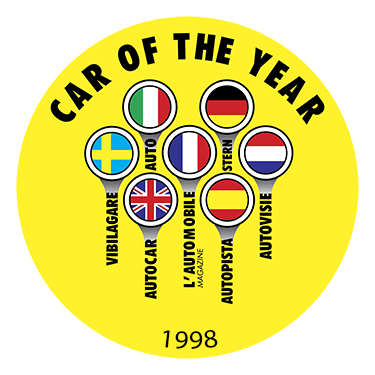 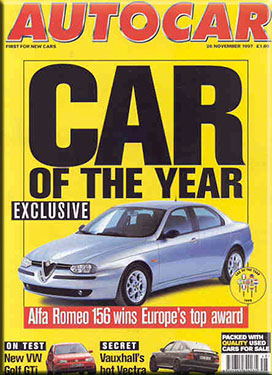 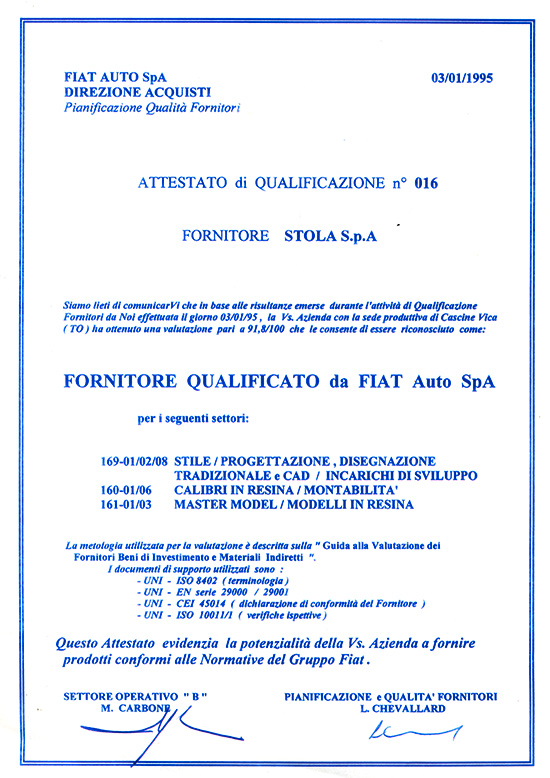 1994 was a year in which, we in the automotive sector, heard more and more about the importance of quality. The principal driver for this was Japan.
In Italy, the Fiat group became particularly sensitive to this when Dr. Umberto Agnelli was appointed to the position of President of the Italy-Japan association, backed by the two national governments.
As a result, Fiat Auto wanted to strengthen their culture of quality, not only internally but also among its suppliers.
This was not a suggestion, but an obligation through a training course that would allow suppliers to continue working after a rigorous assessment for one of the most important automotive groups in Europe.
The required objective was to be qualified for UNI ISO 8402, UNI EN 2900, UNI CEI 45014, UNI ISO 1001/1 certifications.
Engineer Alberto Sasso for Stola s.p.a. organized the whole company to obtain the important result by hiring Mauro Ballerini as an internal quality manager.
The model, prototype and engineering departments had been working for years to a very high level of quality, but now Fiat Auto demanded much more.
The idea was that in order to have a visibly high quality manufactured product, standards had to be applied throughout the project, right up to the point of sale.
In practice, all business processes from the estimate, customer order, confirmation, implementation, testing, management of payment and including delivery and beyond, must be followed with standardised procedures known and respected by all.
After a year of preparation, Luca Chevallard and Marco Carbone from the supplier planning and purchasing department for operating sector B at Fiat Group. awarded the quality certificate to Stola s.p.a. on on January 3, 1995. 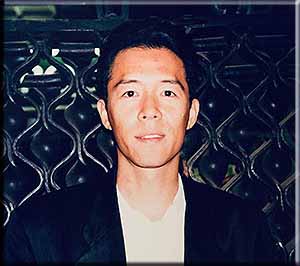 BMW designer Richard Kong.February 1995, following the results of the motor-cycle and supported by designer Richard Kong, BMW Style Centre Director Chris Bangle asked Roberto and Alfredo Stola to create a style model for the new 3 Series.
Bangle wanted to introduce the hard model process, as used in Fiat, to Munich and compare it with their classic clay model process.
Richard Kong was again the BMW designer resident in Rivoli for two months in order to follow the modeling work. 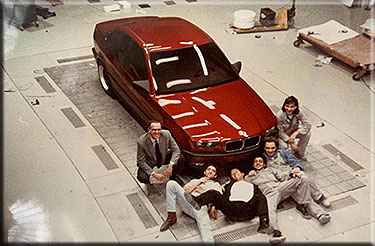 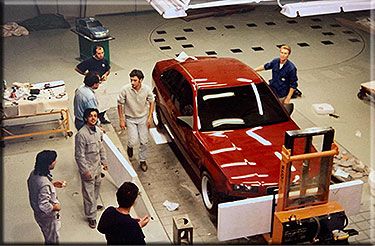 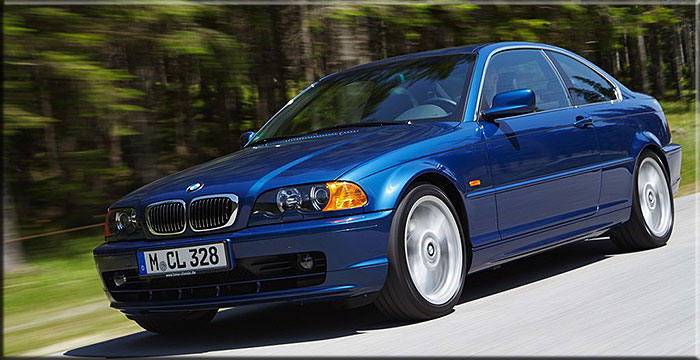 1995 In Stola s.p.a. only one proposal is made for a see trough model in hard material
whose designer is Richard Kong.

The tradition of collaboration between STOLA s.p.a and Saab was more active than ever and the Trollhättan Style Center, through director Einar Hareide, required the creation of a see through model of the new 9-5 sedan, in S and Aero versions.
A year later, in the spring of 1995, the basic station wagon and Aero versions were also requested. 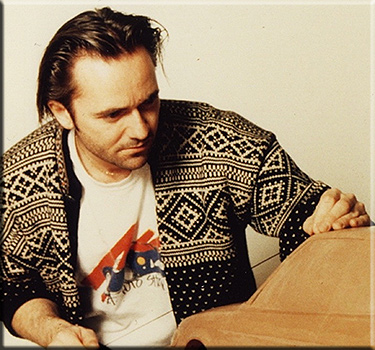 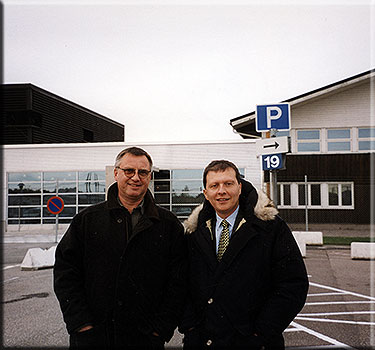 1996 Trollhattan. Pereric Haglund and Alfredo Stola. In the background, the Saab Style Center. 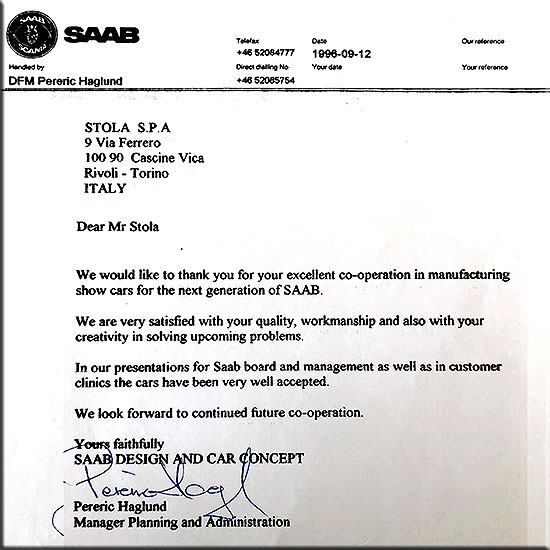 1996 The letter of congratulation for the quality of the work on the 9-5 project signed by the director of model building Pereric Haglund. 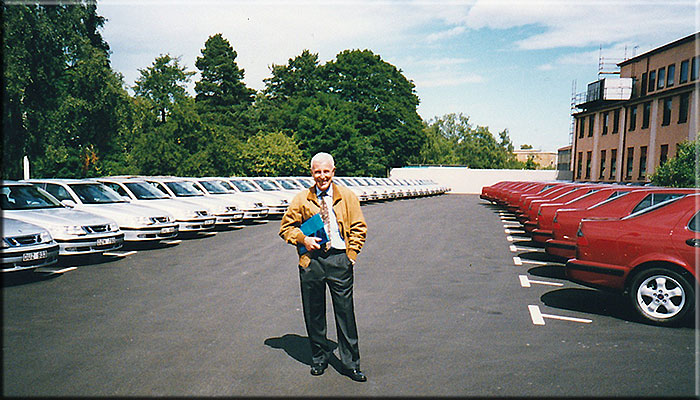 Sweden, Trollhattan, Saab plant September 1997. Engineer Alberto Sasso poses for a souvenir photo among the first pre-production of the 9-5 Sedan. 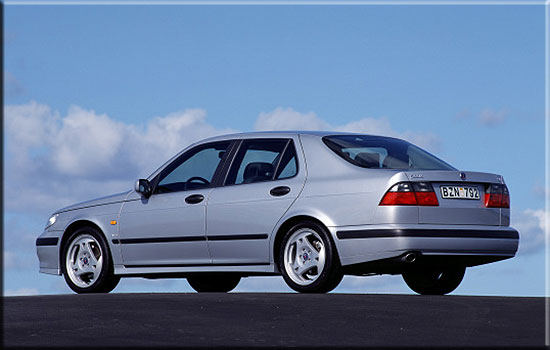 Rivoli December 1995 in Stola s.p.a. a style model of the Saab 9-5 Seedan is made in the S and Aero versions. For cost reasons, the two bumpers and the side skirt were interchangeable for the two versions. 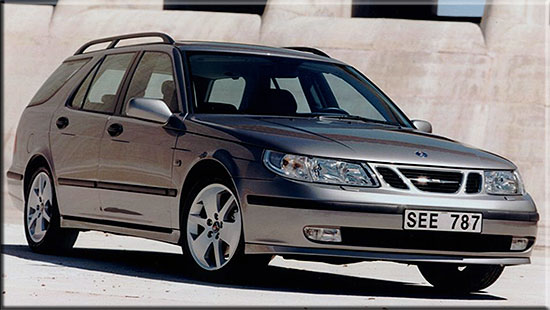 Rivoli September 1996 in Stola s.p.a. a style model of the Saab 9-5 Wagon is made in the S and Aero versions. For cost reasons, the two bumpers and the side skirt were interchangeable for the two versions.

At the beginning of the summer of 1995, a new customer requested that STOLA S.p.a. create two hard See-Through models to be presented at the next Geneva Motor Show in 1996.
Rover, recently acquired by BMW, aimed to imagine a completely innovative and "made in England" style for a future Mini.
For business strategies, BMW decided to postpone the scheduled geneva unveiling.
At the end of 1996,the two models returned to Rivoli in order to make small changes and to be re-painted. 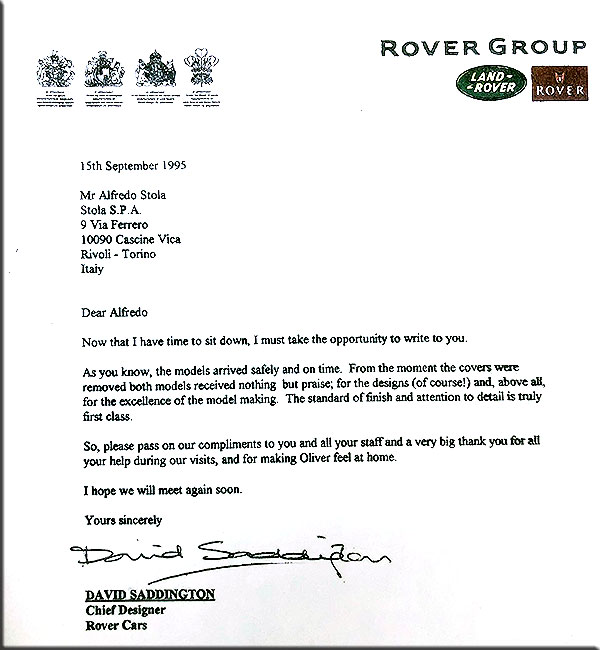 September 1995. Letter of congratulations from David Saddungton, head of the Rover Group Style Center. At that time it was thought that the two models would be exhibited in Geneva 1996, in reality this happened the following year.

In March 1997 at the Geneva Motor Show, the Spiritual and Spiritual Too concepts were presented in a mini-branded booth, the first a four-door and the second, two.
A very important work experience thanks to the meeting with Rover style managers Messrs Saddinngton, Upex and Woolley, all involved with the two Minis.
A few years later, when the Ford group absorbed Land Rover, for STOLA s.p.a. new customers such as Ford America, Lincoln, Mercury and Land Rover were unexpectedly opened up.
These new clients introduced noteable designers and managers amongst whome were J Mays, Gerry McGovern, Marek Reichman, Adriana Monk and Ford Detriot model manager Joe Bonacchi.
For them, Stola would go on to deliver five beautiful show cars between 1998 and 2003. 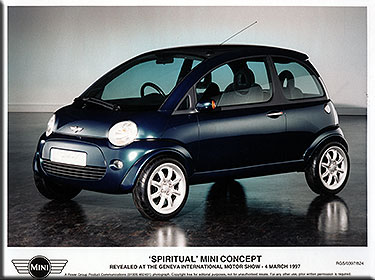 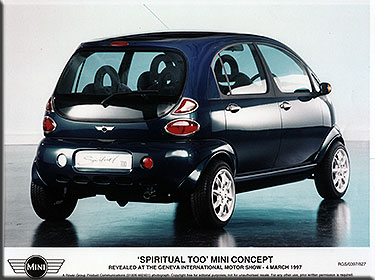 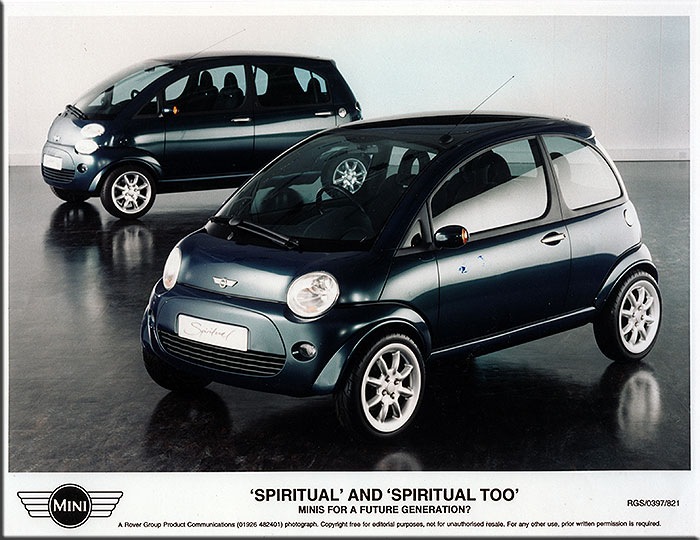 February 1997. The official photos of the two Mini Spiritual and Spiritual Too.

Geneva 1997. The Mini stand with the two Spirituals.