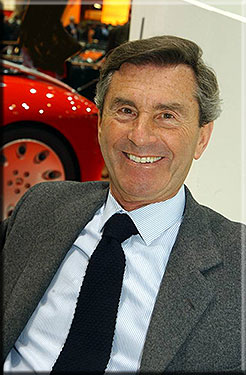 The Engineer Leonardo Fioravanti.In the summer of 1992, STOLA spa created a styling model for Fioravanti srl.
It was a medium-sized sedan with the Fiat brand, called “New Large”.
The stylist, Leonardo Fioravanti, known world wide for some of the most extraordinary Ferraris designed during his time at Pinifarina between 1962 and1987.
In the volumes, the design was very refined and balanced, immediately denoting great personality.
After milling, manual changes were indicated to the modelers with great attention to every detail by Fioravanti himself.
Concurrently, the modellers created a second version of “New Large” directly for Fiat and their in house stylist, Andreas Zapatinas. In essence, the New Large was to go on to replace the Fiat Croma.
This did not happen due to strategic decisions taken by the Turin car manufacturer. Unfortunately there are no photos of the two models made in STOLA spa for either Fioravanti srl or Fiat spa.

In the autumn of 1992, for the first time, Ferrari asked STOLA s.p.a. for "complete" engineering of a body as well as its exterior and interior finishes.
The F133 project, their future 12-cylinder model, went on to be named the 550 Maranello.
This vital work for Ferrari, was the result of the integration of the Autec-Stola designers, directed by Gottardo Bustreo for the technical element and Carlo Biassoni for management.
From exterior and interior styling models received from Pininfarina in Cambiano, together with the Ferrari engineers, they worked continuously for over two years through to 1995. 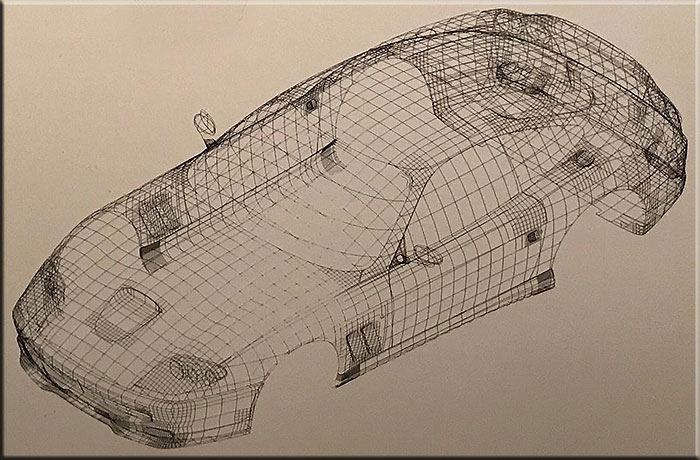 The first activity was the complete scanning of the two style models from Cambiano.
The t aim of the surface-modeling departments of STOLA s.p.a. was to create class A surfaces, and the two related Mathematics Verification Masters for exteriors and interiors.
These activities were personally followed by Massimo Stola, Carlo Mantovani and Vittorio Della Rocca and their teams.
The Master was be validated by Engineer Ramaciotti for Pininfarina and by Engineer Rossi for Ferrari, and marked the real beginning of the design, given that the pre-feasibility styling activities had already been carried out in Stola in parallel by Roberto Arpini and Giovanni Galimberti. 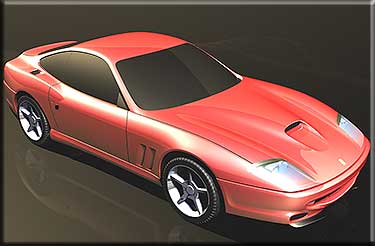 Rivoli December 1992. The mathematical surfaces created in Stola s.p.a. after surveying the style model received
from the Pininfarina study and research center
in Cambiano. 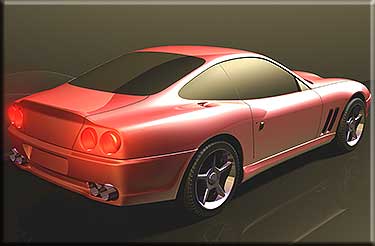 From these surfaces the mathematical verification master will be realized. 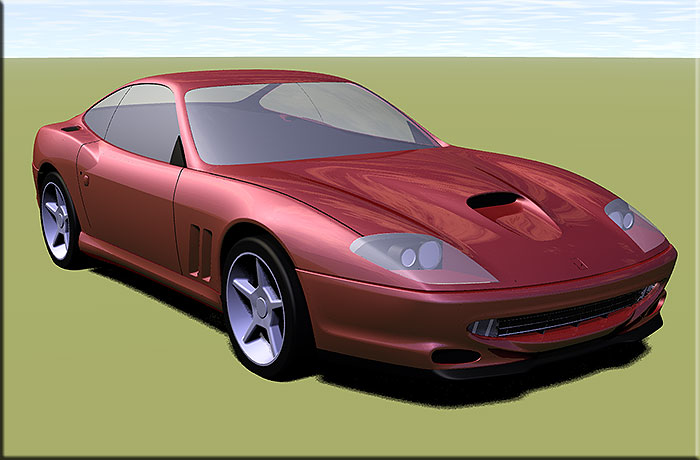 Rivoli December 1992. Final version of the mathematical surfaces that will be used
for the construction of the master.

In the spring of 1993, Gottardo Bustreo appointed Franco Rabaioli as Project Manager to interface with the engineer Maurizio Rossi,assisted by Riccardo Ugolini and Vincenzo Matullo.
Dozens and dozens of trips between Maranello, Cinisello Balsamo and Rivoli followed.
Thus began the studies to define the bodywork, involving the platform, body sides, "greenhouse", moving parts and all the related internal structures related to the sheet metal, bumpers, lights and sill covers.
Concurrently, the interior team were studying the details of the instrument panel, console, door panels, headlining and boot trim.
The design phase in the three directions described was very important as it defined the technological solutions that would allow us to maintain, on one hand the aesthetics required by styling, and on the other the final costs of the car. 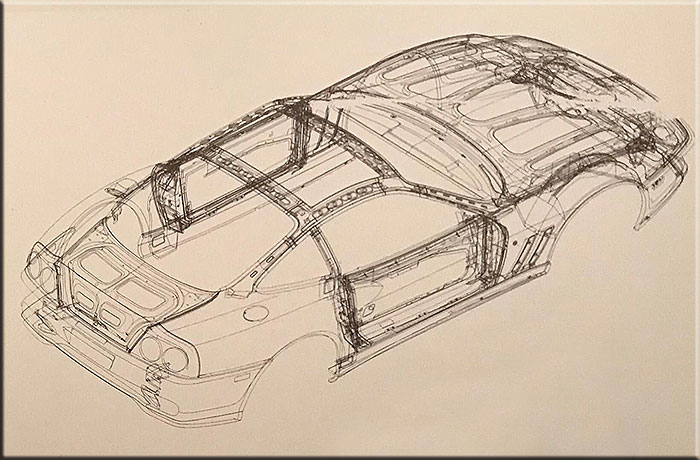 Cinisello Balsamo spring 1993. In this drawing you can see the first design studies.
In particular, the moving parts of their structures and the upper crosspieces of the pavilion.

Ferrari, Stola and the many co-designers could then make the production details work together in a single platform to achieve common goals: maximum quality with cutting-edge technological solutions at a realistic cost.
Once the objectives were reached, the 3D design of each component in order to create final production tooling could begin.
The validation of 3D projects took place through checks with virtual electronic systems followed by physical tests on the first prototypes made in Maranello.
This highly critical activity for the F133 project was entrusted to STOLA s.p.a. and was managed by Gianfranco Morlacchi, most of the time on site at Ferrari. 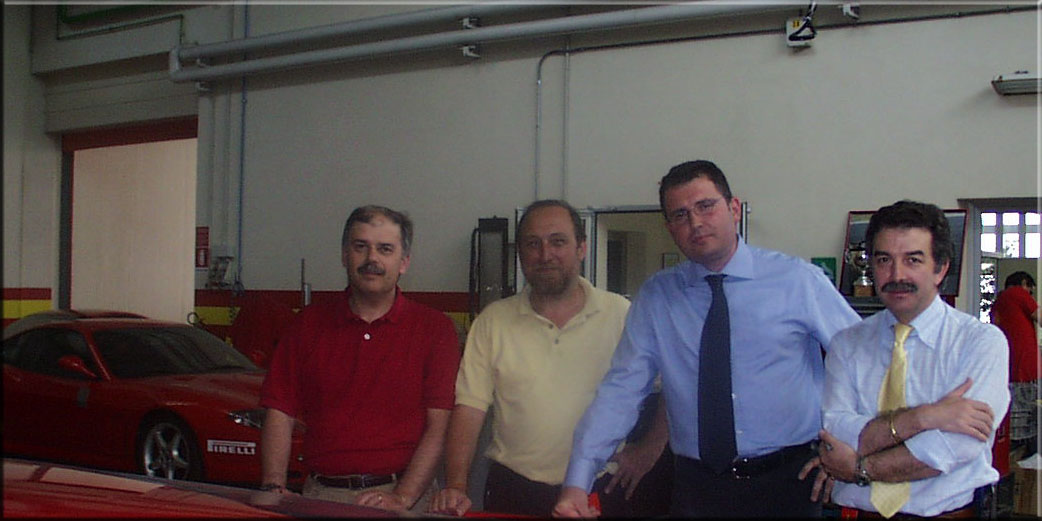 Maranello summer 1995. In the experimental construction department of Ferrari in a souvenir photo.
From left Mauro Del Monte (Ferrari), Pietro De Micheli (Stola s.p.a.), Piero Migliorini (Ferrari) and Giuseppe Castiglioni (Stola s.p.a.);
in the background on the left one of the 550 Maranello prototypes. 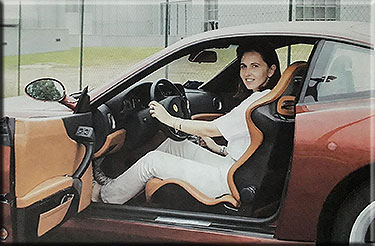 Maranello November 1996. Paola Busato manager of STOLA s.p.a of the Bill of Material system at the helm of one of the very first 550 pre - production. 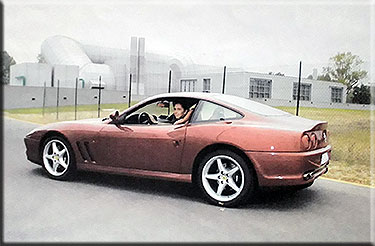 The photograph is taken inside the Ferrari s.p.a., in the background the wind tunnel. 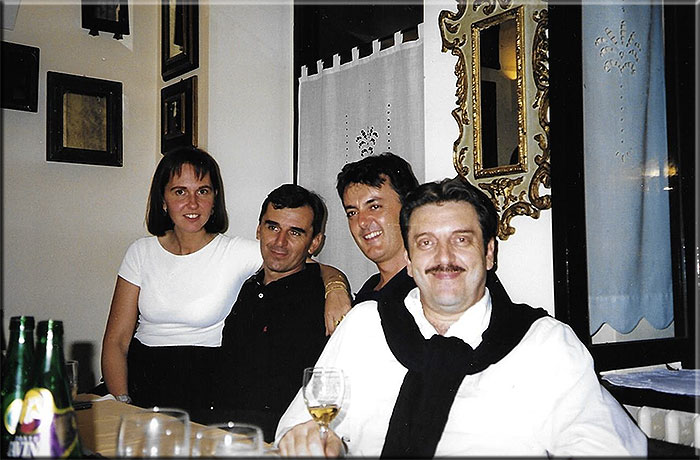 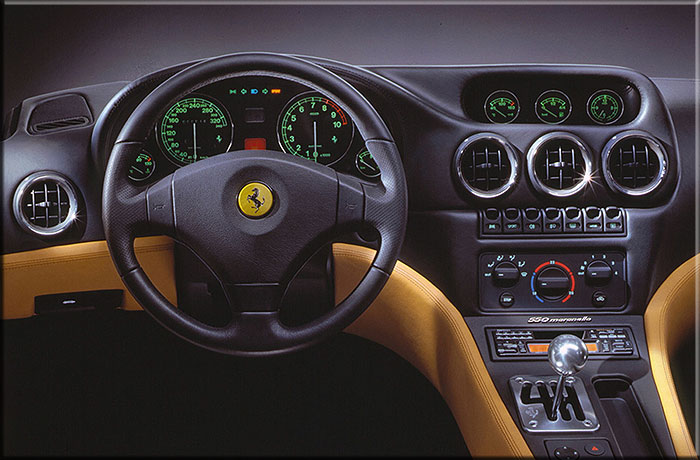 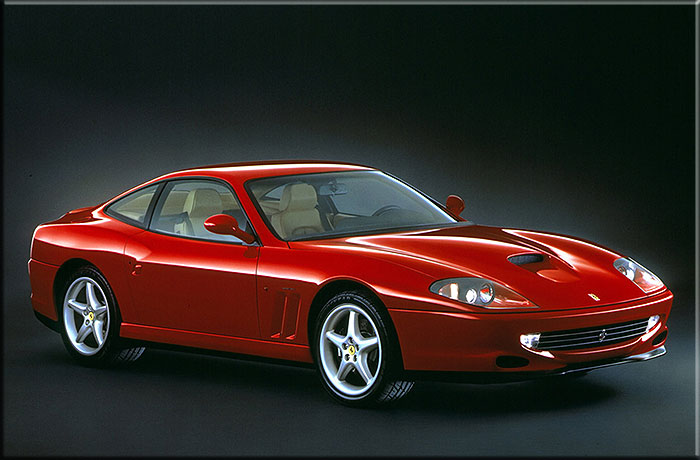 1996 one of the first official images of the Ferrari 550 Maranello.
1992 - 993 for this project Stola spa realizes for Ferrari the master of verifying the mathematics of the exteriors and the complete design except for the mechanics.

The Ferrari 550 Maranello was presented at the Nürburgring circuit in summer 1996. Engineer Amedeo Felisa invited Carlo Biassoni, Gottardo Bustreo and Giovanni Galimberti to represent the Stola team at this unforgettable event. 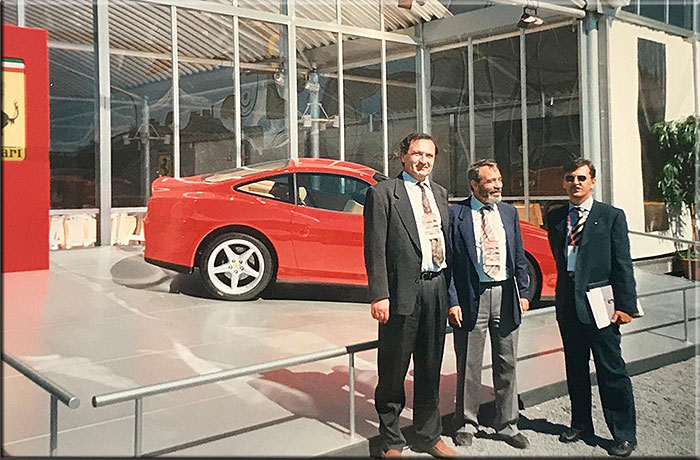 At the beginning of 2000, the same team designed the F133M for Ferrari, In Stola.
This modified version went on to be called 575M Maranello.
The restyling of the exterior and interior, and the installation of a new engine and automatic transmission were the activities carried out between the Cinisello Balsamo and Rivoli offices.
For both F133 and F133M projects, Engineer Paola Busato from the Rivoli headquarters managed the bill of materials as well as liaison between the Stola and Ferrari teams with with frequent trips to Maranello. 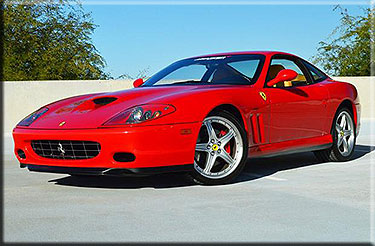 The Ferrari 575M Maranello designed by Pininfarina was officially presented to the press in 2002. 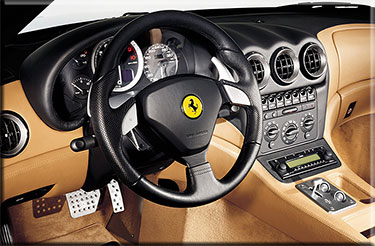 In 2000, Stola s.p.a. for Ferrari he designed them between the Cinisello Balsamo and Rivoli offices.

n June 1993, before disassembling the Jobs 35 milling machine in order to transport it to the new, almost finished Rivoli premises, the last milling model in Via La Thuile 71 was for Pininfarina.
The project in question is the Ferrari F50, designed at the Cambiano Research and Study Center.
The customer required the milling of a style model, the preparation of the tool path for the milling cutter and the relative resin buck with great urgency.
The model was specified in a  hard material with all the technical assemblies as removable parts.
For the record, Pininfarina did not request any manual modification on the model to the Stola men. 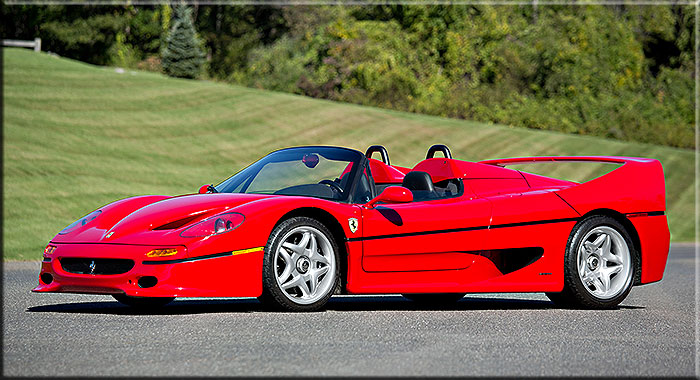 June 1993 Pininfarina asks STOLA spa for the "only" milling of a Ferrari F50 Style / Technical Model.
Photographs were not allowed to be taken during work due to reasons of industrial confidentiality.

On September 6, 1993, after a continuous month of relocation from Turin and Grugliasco to the new factory in Via Ferrero 9, Rivoli, work gradually re-started, reaching 100% efficiency over the following three months.
10,500 square meters covered, of which 2,500 square meters of technical offices, 600 square meters of executive area and 7,500 square meters of workshop.
The figures demonstrate the scale of the new structure.
The design offices, surfacing and toolpaths were located on the first and second floor, organized in three open spaces with movable walls that could be arranged according to project needs.
The workshops were multi-storey, on the ground floor the milling department, testing, six master assembly boxes, the traditional model shop, the warehouse and the workshop manager’s office.
On the basement floor, the resin department, the materials warehouse, the garage, the changing rooms and the canteen.
The prototypes and style models were on the second floor, organized in five boxes, a traditional model shop, a two-oven painting department with an adjacent preparation area. Each styling box was completed with an elevated work office for the exclusive use of clients stylists from which they can see their models from above.
The management was on the first floor together with accounting, purchasing, sales and personnel.
Also on the same floor, two meeting rooms and a third smaller one which accommodated the historic room of Via La Thuile 71 of 1966 with original furniture and reproduction of the floor. 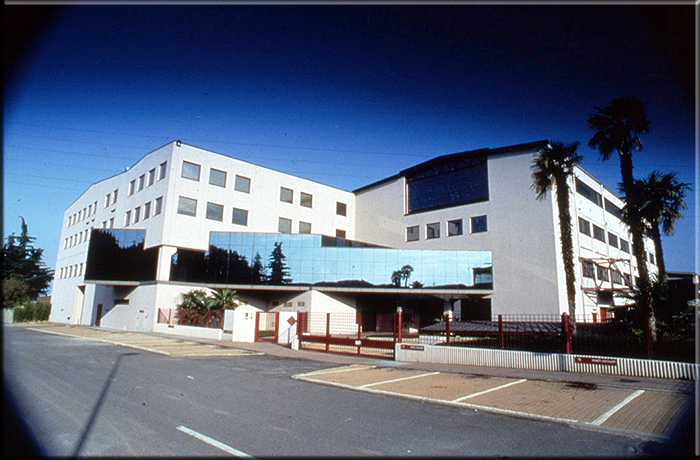 For the occasion of the opening of the prestigious new headquarters in Rivoli, the Stolas commisioned the design of a second, more horizontal logo.
The idea was not to replace the original diamond but to have a marque that would be more suitable for use on design work and prototype number plates.

For industrial confidentiality in order to protect the privacy of projects, each sensitive area was equipped with a video surveillance system. All entrance doors could only be opened by use of a personalized magnetic card specific to the project.

September 1993, the magnetic security cards to access the various departments distributed to the employees of STOLA s.p.a. 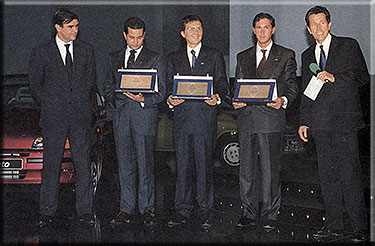 11 September 1993 Torino Lingotto. Paolo Cantarella, X, Alfredo Stola, Y, Riccardo Bussolati.On September 11, 1993, as the same time as the launch of the Fiat Punto, Stola spa received the Qualitas award.
Gold broaches with the Fiat emblem and silver plates were given to the 4 youngest managers of the Punto project representing their respective companies The award ceremony in front of 4000 people was performed by Paolo Cantarella, Fiat CEO, assisted by Doctor Riccardo Bussolati, Purchasing manager.
In particular, STOLA spa was rewarded for the development of the dashboard and the award is collected by Alfredo on behalf of the team that carried out the work.