In China, on April 19th during the AUTO SHANGHAI 2017, IQONIC presented two drivable prototypes, model SEVEN in Vip and Premium version.
This project was strongly wanted by Mr Alan Wu and Mr Sam Fu and it hadj the target to create an exclusive luxory van with electrical traction for the Chinese and Middle East markets. 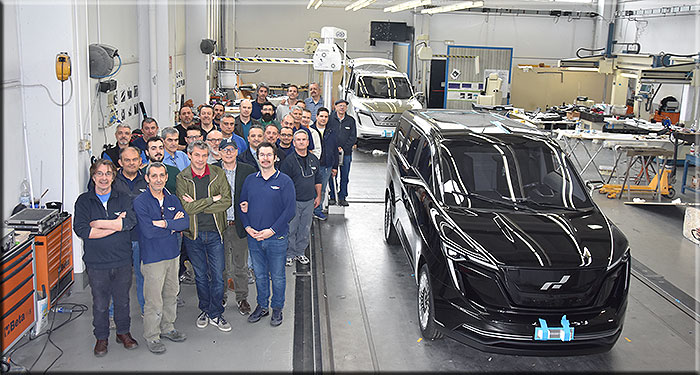 The style design of the Seven has been developed in W Motors style center in Dubai by Ralph Debbas and Exequiel Disalvo in order to better understand the taste and demand of the future customers.
The developing and engineering of the Seven were fully carried out by Magna Steyr Italia directed by Tiziano Novo, the prototypes were built by Mercury, STUDIOTORINO was technical advisor of the Austro-Canadian company supervising the construction of them. 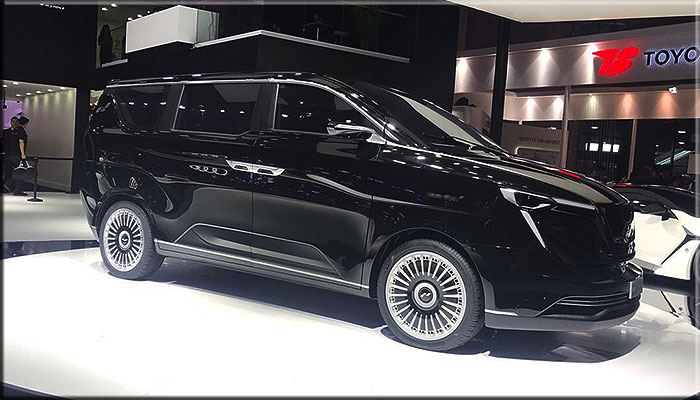 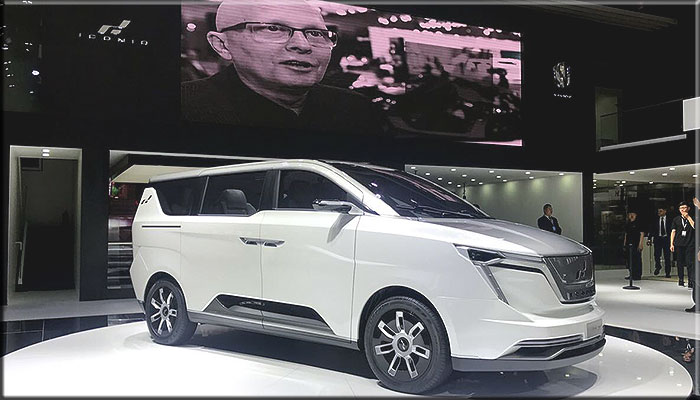 Between the 7th and 11th of June 2017 the art car version of the Studiotorino Moncenisio was displayed on "NESPOLO for Alfredo Stola" stand, on the occasion of the third "Salone dell'Auto di Torino 2017 Parco Valentino2.
TORINO - ZUFFENHAUSEN is the title of the artwork which tells the story of the link between Porsche and the constructors, designers, and body workers from Turin from 1947 up today.
All the stories began seventy years ago with a design contract between Cisitalia and "Studio Porsche".
The first trip to Turin by Ferry Porsche to supervise the construction of the single seater CISITALIA TYPE 360 Grand Prix car, was the beginnig of the story. 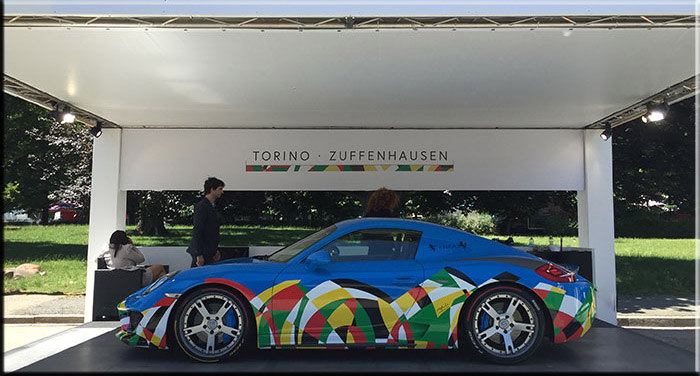 The MONCENISIO painted by Nespolo is a tribute to "33 SPECIAL AND RARE CARS" all designed and built in the Turin area, and to Cisitalia, Abarth, Bertone, Italdesign, Stola and Studiotorino workers who were involved in these projects. 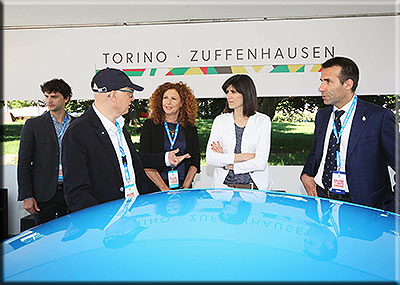 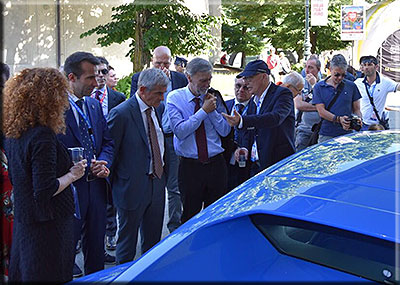 The minister of transport Delrio, and the President of the
region Chiamparino at the Studiotorino Stand. 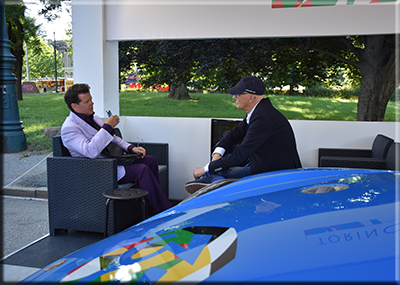 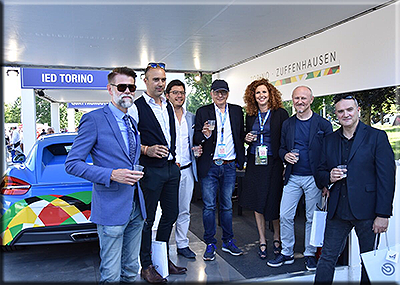 On November, 29 2017 in Dubai, Ralph Debbas, WMotors CEO, presents the prototype Fenyr Supersport in world premiere.
It is the opening of the representative office and showroom in partnership with ICONIQ MOTORS for the United Arab Emirates. 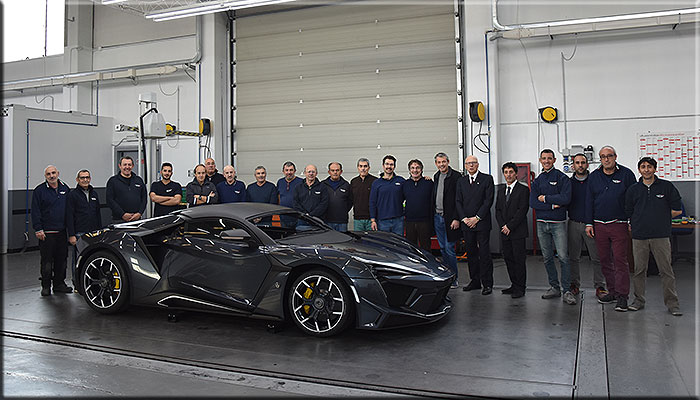 At the cerimony, very important political figures and entrepreneurs of the Arabic penisula and China were present. 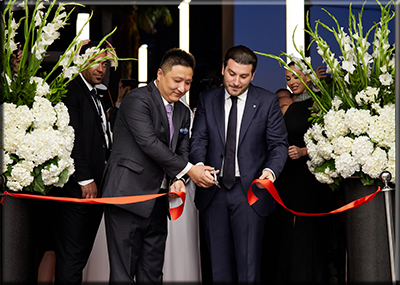 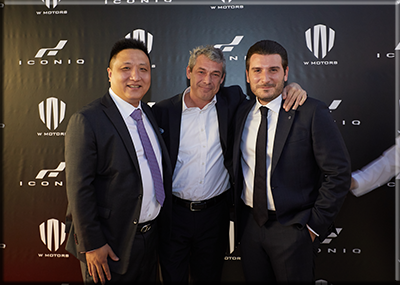 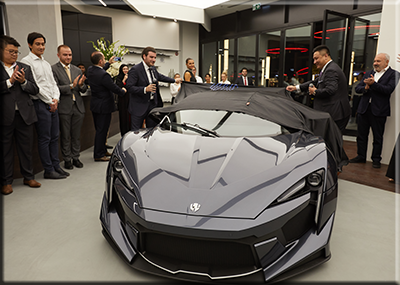 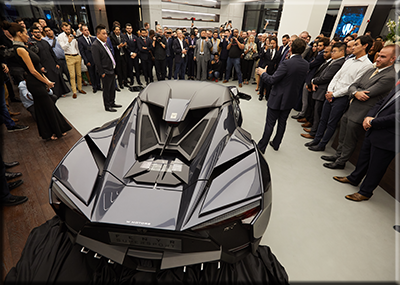 The guest at the event in the W Motors - Iconiqs Show Room.

Derived from the styling model presented at the 2015 Dubai motor show, after two years of stylistic refinement by W Motors, and technical development by Magna Italia, the first model arrived.
The prototype is aimed at a limited edition production that would be made entirely by hand, customizable by customer request.
STUDIOTORINO were technical advisor to the Magna Steyr Italia Team for modeling, prototyping and engineering support activities. 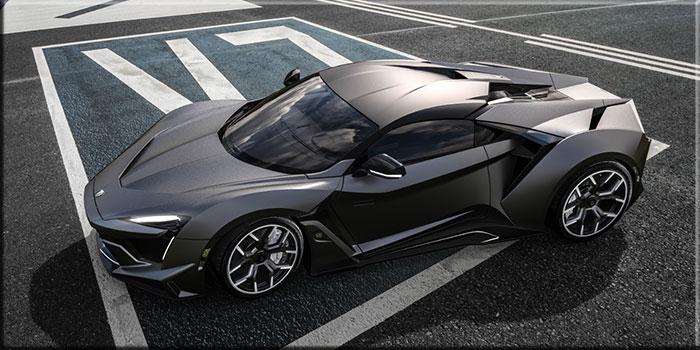 In parallel to the Fenyr presentation in Dubai, on the 29th November 2017 the scale model of the Iconiq L5 was shown at its own world premiere.
Designed by W Motors, the L5 is a vision of the future of autonomous mobility in the luxury segment.
The goal of Iconiq is the realization of a highly detailed 1:1 scale opening model to be presented at the beginning of 2019. STUDIOTORINO has been advisor to Magna Steyr Italia for the surfacing and build activities of the scale model. 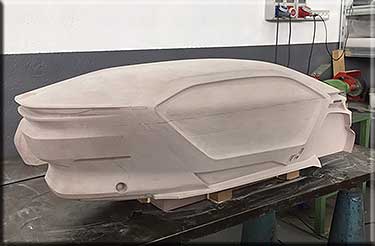 Rivoli September-November 2017. The construction phases of the Iconiq L5 at the Mercury factory. 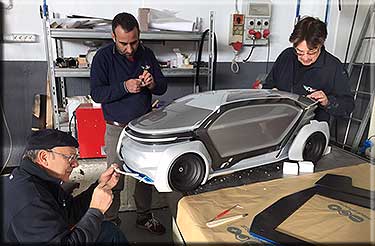 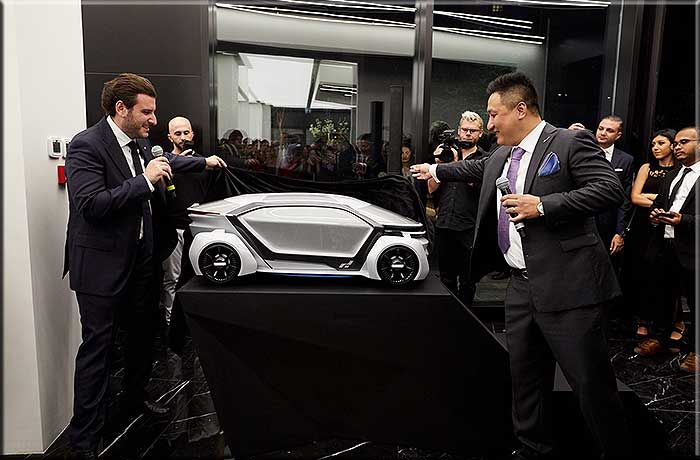 Dubai 29 November 2017 Ralph Debbas and Aln Wu present at the world premiere together with the
Fenyr Supersport the futuristic Iconiq L5 scale model.

On 12 December 2017 in Turin, Aitor Aguilar presented his degree thesis to the IAAD commission.
The external speaker for STUDIOTORINO was Maria Paola Stola. 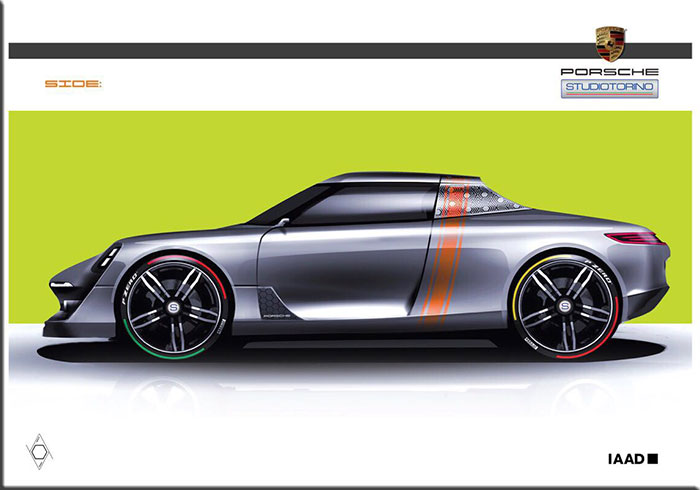 "E 914 TAYRONA" is the title of the thesis; the choice, shared with the student, was proposed by STUDIOTORINO, with the brief being to create an electric Porsche 914. 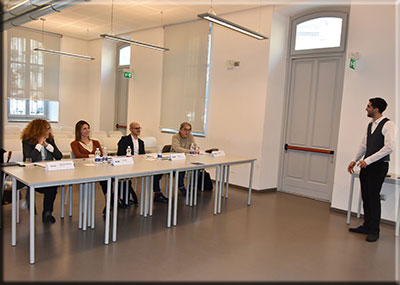 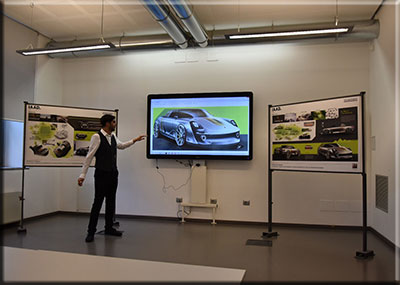 Aitor Aguilar exposes the theses to the IAAD commission. 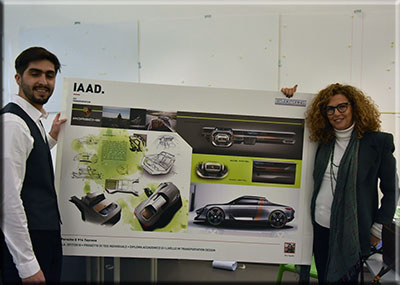 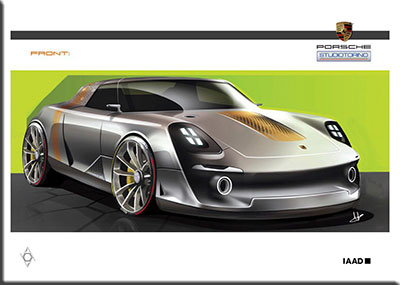 Aitor Aguilar, illustrated a contemporary reinterpretation of the 914 in a modern style, imagining the first 100% electric-powered sports Porsche.
Two doors, two seats, with a particular look at leisure and adventure, for a modern and dynamic clientele.
Colors, graphics and the name “Tayrona” all suggestive of the graduating students native Colombia. 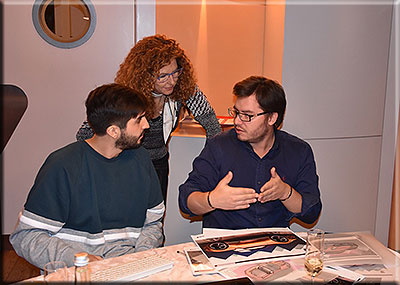 Wladimir Lasbugues (since 2013 Centro Stile JAC) has also been supporting the thesis “E 914 Tayrona”. Thanks to his passion, and alongside Maria Paola Stola, he helped Aitor to instill as much of the original 914 DNA as possible into the new “E 914 Tayrona”. 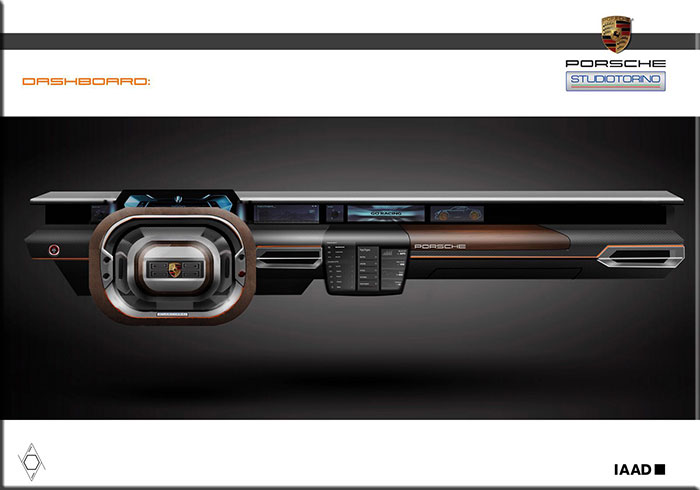 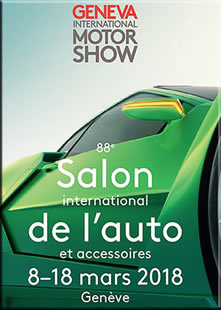 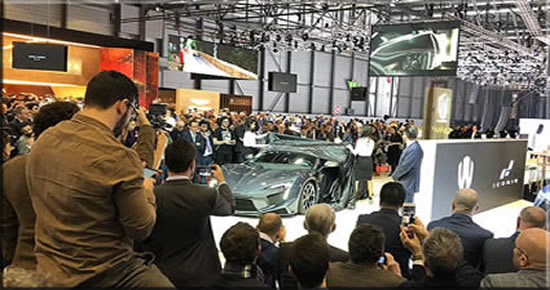 Geneva, March 6th 2018,
the moment of the official presentation.

On March 6 th, 2018, at the eightieth Geneva motorshow and for the first time in Europe, Ralph Debbas officially presented the FENYR SUPERSPORT from the W MOTORS stand. Present at the event were technical partners Kevin Dallas from MICROSOFT, Philippe Jarre from AKKA, Alfredo Stola from STUDIOTORINO and Tiziano Novo from MAGNA STEYR Italia. 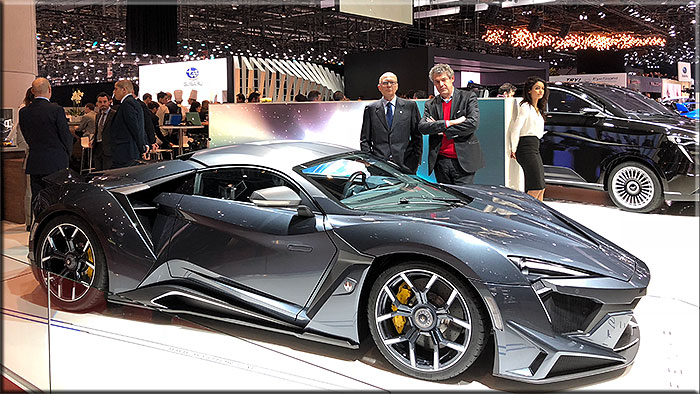 At the same event, Alan Wu showed the press and the public the scale model Iconiq L5 with the promise to complete a full scale opening model for the beginning of 2019.
Present at the event were technical partners Tiziano Novo of Magna Steyr Italia, Kevin Dallas of Microsoft, Philippe Jarre of Akka, and Alfredo Stola of Studiotorino. 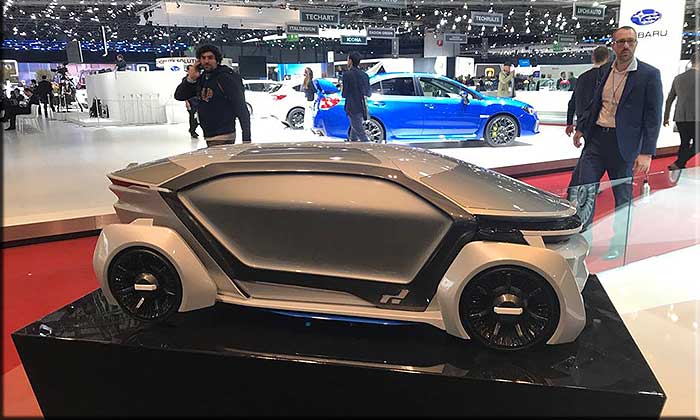 Geneva 6 March 2018 at the W Motors - Iconiq stand at the European premiere of the Iconiq L5 scale model.