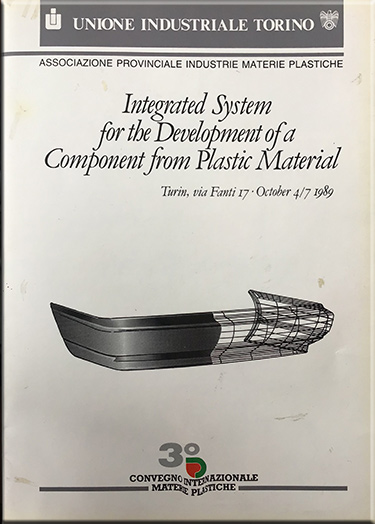 On the occasion of the "Third International Plastics Conference", organized by the Turin Industrial Union on 4/7 October 1989, Stola s.p.a. was involved in a joint project together with Dea, Prime Computervision, Jobs, Tea, Sandretto and Comau.
The Turin Industrial Union, in collaboration with Fiat Auto and using their recently launched Fiat Tipo, wanted to present a report on the development of plastics in the automotive sector.
The Tipo was a high-volume production car and, besides the usual bumpers, included significant plastic components such as the tailgate and rear fenders.
The skill sets represented by the participating companies were described in detail throughout all the projects working phases, demonstrating technological integration in 9 points.
Style models, testing and scanning of style models, milling of master models, computer aided engineering, mold design and construction, moulding and assembly.
As we will see later, this conference proved to be an inspiration for the Stola company on the Fiat Punto project, in the development of the instrument panel from the model to the first set of moulds. 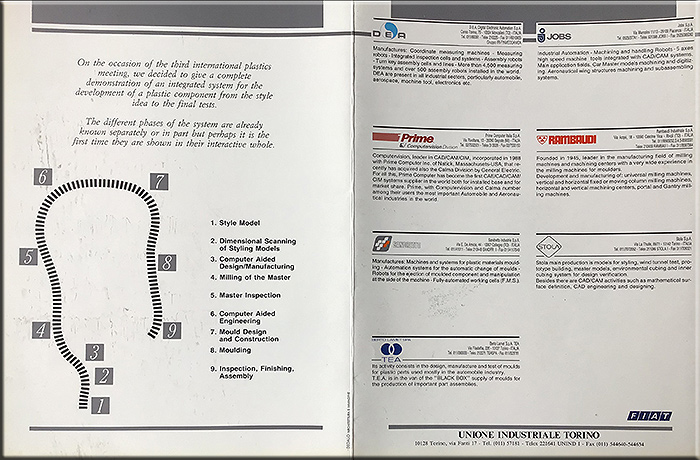 In November 1989, at the request of the Fiat top management, STOLA spa acquired 70% of the Autec engineering company whose Chairman was Engineer Dante Giacosa.
The negotiations took place between Doctor Cesare Romiti and his assistants and Roberto Stola together with Carlo Biassoni and Alberto Sasso.
This acquisition would prove strategic for future relations with Fiat Auto and its galaxy. 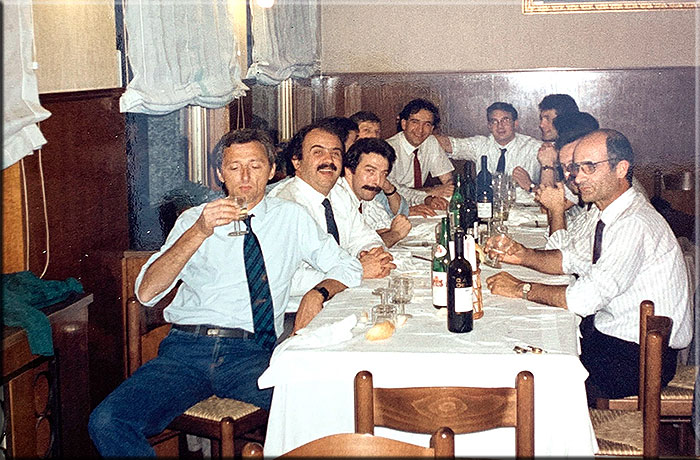 It was a great honor to work alongside the engineer Dante Giacosa, a  world legend in the history of the car with unsurpassable creations such as the Fiat Topolino, the 600, the New 500, and the 127, 124, 125, 128, 130, and 126.
With Autec, STOLA spa would have some of the best Italian design engineers, including former Alfa Romeo men of Arese's technical management. 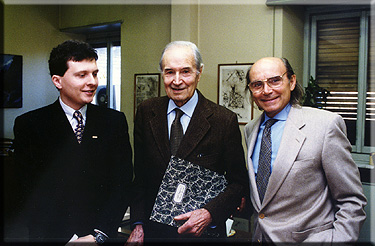 Turin 3 March 1990 at the Autec headquarters in Corso Vittorio Emanuele II. Alfredo Stola and Roberto Stola with the Engineer Dante Giacosa on the occasion of his eighty-fifth birthday.In general, we remind you of Messrs  De Micheli, Gaburri, Natta, Morlacchi Besana, Petrelli, Maran, Roberto Arpini, Giovanni Galimberti, Alessandro Ghezzi and Paolo Zerbini.here were two structures, the first being the seat of the presidency and of the mechanical studies located in Turin, 48 Corso Vittorio Emanuele II, the second more operational in Cinisello Balsamo.
The corporate structure was made up of the engineer Giacosa as president, the engineer Porro representing Fiat as a councilor, Roberto Stola managing director and Alfredo Stola as a councilor. 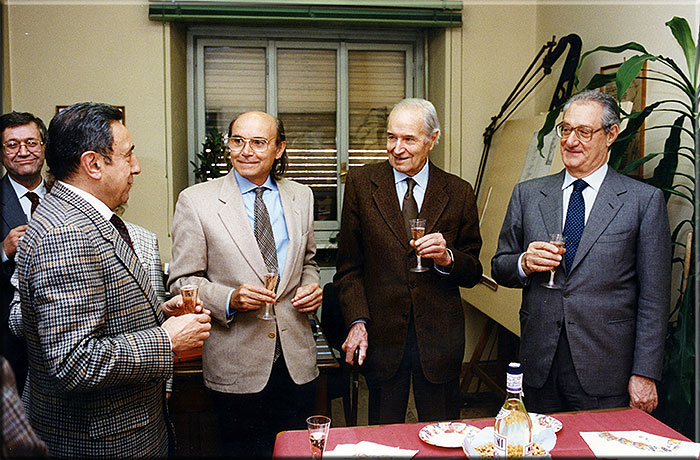 January 3, 1990 At the Autec headquarters in Corso Vittorio Emanuele in Turin Dante Giacosa celebrates his 85th birthday with his colleagues. Present at the event Roberto and Alfredo Stola and Dr. Cesare Romiti representing Fiat and on the left the Ingeger Maran.

From this fortunate situation they started immediately to design the bodies external and interior finishes of Ferrari cars.
Also the Engineer Amedeo Felisa, Technical Director of Ferrari s.p.a. he is a former Alfa Romeo designer and all these men from the Technical Department of Arese including Gottardo Bustreo and Carlo Biassoni (purchasing department) are for him a guarantee of quality and success.

The lawyer Luca Cordero di Montezemolo and the engineer Amedeo Felisa between the years 1990 and 2004, a period in which the STOLA spa had realized important projects for Ferrari and Maserati for the design of chassis, body and interior finishes and Masters for mathematical verification.

Among the Autec activities not present in STOLA spa,  structural calculation, suspension design, studies on small displacement engines and engine transmissions.
In 1993, by request, of Dr. Cesare Romiti and Engineer Paolo Cantarella, the remaining 30% of Autec shares was sold to STOLA spa.
The labour agreements do not change, nor  the relationship of respect between the highest Fiat leaders, and  Stola. 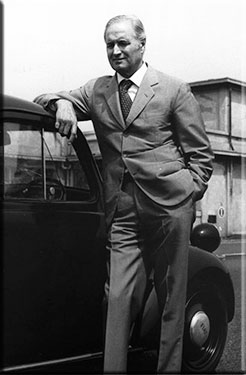 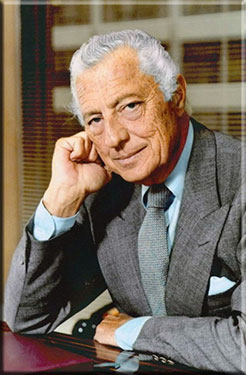 The lawyer Gianni Agnelli in the 90s.

Engineer Giacosa died on March 31, 1996 at the age of 91, working in Fiat, then  Autec and finally in STOLA spa from 1929 to 1996 for a good 67 years, until his last day of life.
From these dates  we can understand the absolute gratitude of the lawyer Agnelli to his greatest designer and the esteem given to the Stola company for the last seven years of work done together with Engineer Giacosa.
Private services were held in Turin in on 3 April 1996 at the Parish Church of San Vito.
Beyond the Giacosa Family and the Agnelli Family, Roberto and Alfredo Stola were expressly invited.

In the early days of December 1989, STOLA s.p.a was already involved in the construction of the Master Model for the future Lancia sedan type 838 which will later be called Kappa.
From the beginning of 1989 the engineering content (bodywork, exterior finishes and complete interior) was being realised by Autec.
In November of that year Stola acquired 70% of their share capital, taking control of the company.
For the Stola family this was the first production car project with work being split between the Autec offices in Cinisello Balsamo and Turin, and the Stola facility in Grugliasco.

Typical plan and sections of the Lancia type 838 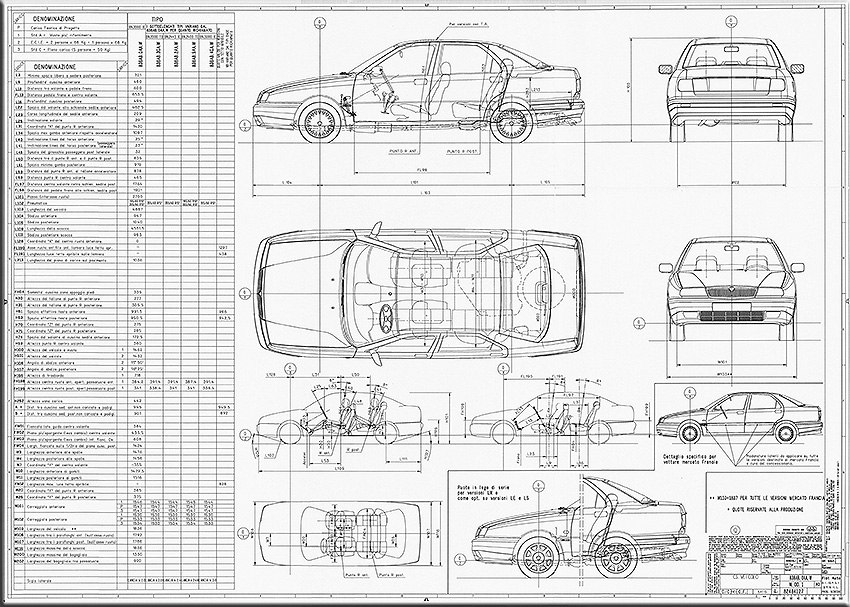 The Autec and Stola Technical Directors were Engineer Antonio Gaburri and Gottardo Bustreo and the Project Manager was Piero De Micheli.
Their contacts in Fiat Auto for the three year duration were Engineers Camuffo, Vinante, Battistini, Villa and Filippa, who organised weekly meetings at the Palazzina di Mirafiori, section 5, entrance 8.
Design work was carried on a drafting machine which was then translated to the Computer Vision system recently purchased in accordance with the clients requirements. Roberto Arpini and Giovanni Galimberti, coordinated by Franco Rabaioli, were the Autec project leaders.
To enable the monthly invoicing of Fiat Auto, Dr. Carlo Biassoni paid great attention to the contract inherited from the recently acquired company.
The customer’s design objectives, compared to the current Lancia Thema, included the improvement of tolerances, an increase in interior space and, through the improvement and increase in the number of seals, better acoustic comfort.

Project table in which it is highlighted that the design
is by Autec.
Roberto Stola, who for years saw the engineering of the mass-produced car as a fundamental objective for the future of Stola, followed this project with great passion.
The Lancia Kappa went on sale to the public in 1994, replacing the Thema. 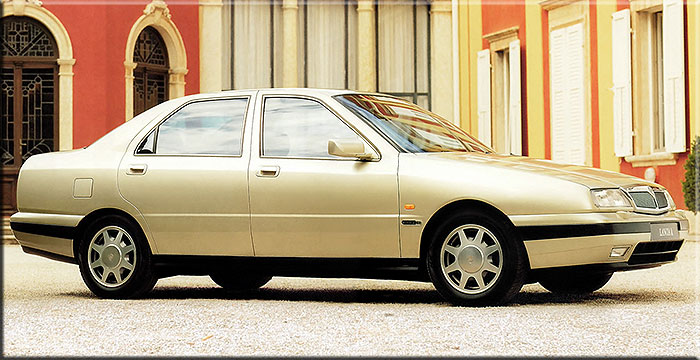 Between 1991 and 1993, STOLA s.p.a. and the subsidiary Autec develop the design of the body and exterior finishes of the Lancia Kappa for Fiat Auto. 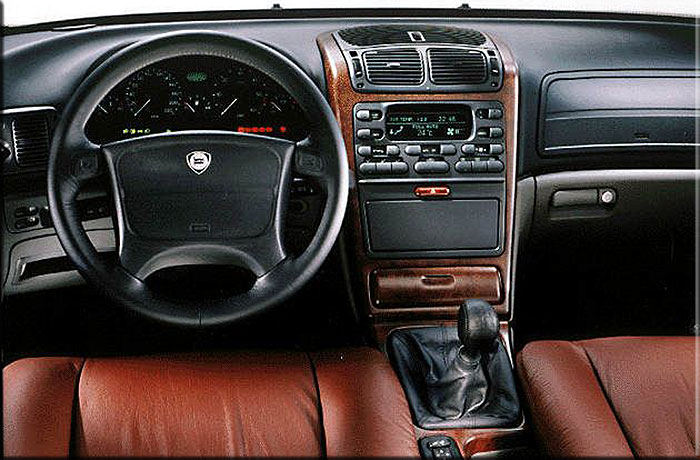 Between 1991 and 1993, STOLA s.p.a. and the subsidiary Autec develop the design of the interior finishes
of the Lancia Kappa for Fiat Auto.

For many years, but without success, Stola tried to establish a working relationship with Lamborghini, more than  just for economic factors but the pursuit of the satisfaction of having among its customers the Sant'Agata Bolognese brand.
In December 1989 through the Engineer Luigi Marmiroli, technical director of Lamborghini, Alfredo met the Engineer Mauro Forghieri at the Modena base best known as Lambo.
It was a truly unforgettable meeting for the thrill of knowing and talking about work with a legend of the design of the most extraordinary Ferrari Formula 1  multiple World Champions.
At the end of the technical meeting we returned to Turin with a Floppy Disk with the mathematics of the whole body of the car.
The Stola s.p.a. will build all the models in a sort of separable Master to be able to then build the carbon molds.
The activities of making the carbon fiber parts were managed directly by Modena Team. 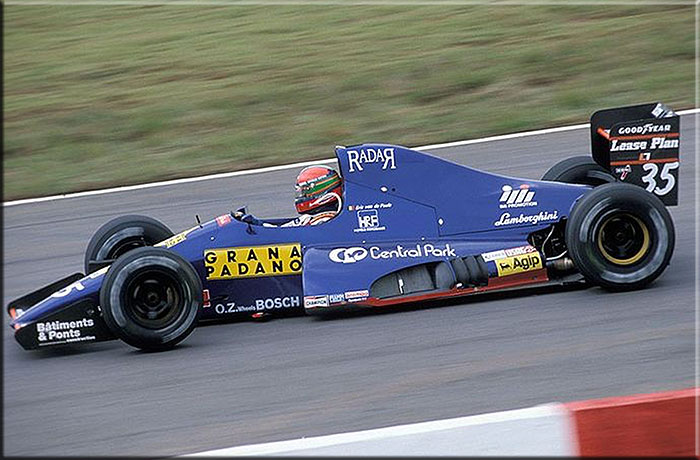 As is well known, Lambo would only take part in the 1991 world championship with the drivers Nicola Larini and Eric Van De Poele,with little luck. For STOLA spa, however, it was an unforgettable experience not only for the prestigious meeting but also because the Lambo was really beautiful and aesthetically different from the others. 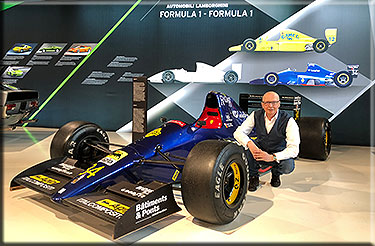 3 May 2018 Alfredo Stola at the Lamborghini museum.Not once did Alfredo travel to the Emiliana Motor Valley  without visiting the Lambo in the Lamborghini museum in Sant'Agata Bolognese.
For the Lamborghini Technical Department, later in 1993, in the new Rivoli factory, a little work will be done on the Diablo type.
A roadster version of the Diablo was modelled based on a standard coupe via CNC milling.
From these new surfaces resins for negative and then positive molds could be cast, useful for the next stage of production of the new open version. 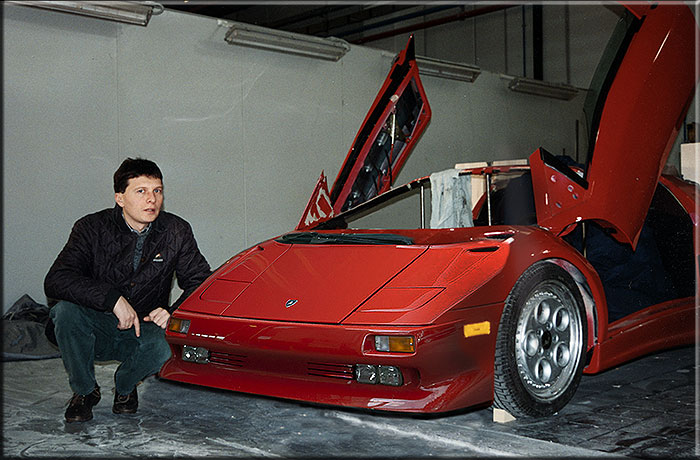 1993 Rivoli. Alfredo Stola on the side of the Master Model of the Lamborghini Diablo for the Roadster variant construction.

1993 Diablo Roadster work realized for Lamborghini spa. The transformation of the their coupé Masters into spiders. 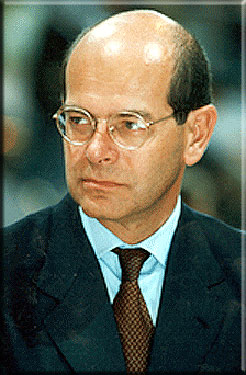 Engineer Lorenzo Ramaciotti.In January 1990 at the model shop in Via La Thuile, STOLA spa created a Mathematical Verification master of the Ferrari 456 GT for Pininfarina .
The style was directed by the engineer Lorenzo Ramaciotti, manager of R&D at Cambiano, masterly re-interpreting the purest of the Gran Turismo 2 + 2 concepts in respect to the previous 365GT4 2 + 2, 400 and 412 models.
Pietro Camardella was part of the Pininfarina team of designers supporting the project.
After several changes following the direction  of the stylists and the subsequent update of the Master, which would be presented  to the board of Pininfarina and  the lawyer Luca Cordero di Montezemolo accompanied by  engineer Amedeo Felisa. 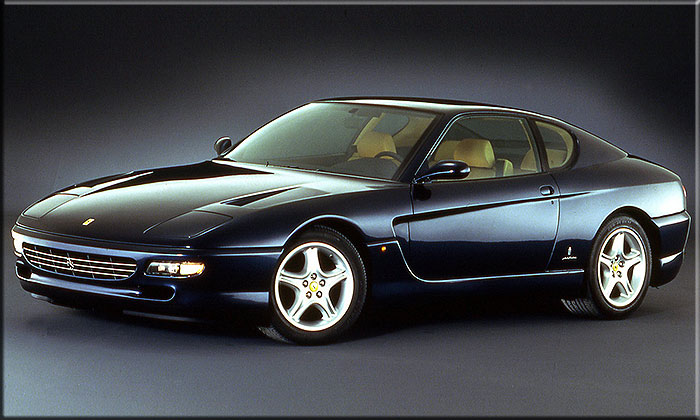 1992 Official photo of the Ferrari 456 GT.
In 1990, on behalf of Pininfarina, Stola spa realizes the Mathematical Verification Master.