In these pages, it is my desire to tell the story of my family's one hundred years of dedication to the car. Beginning with my grandfather, Alfredo, whom I did not know, who started with a small coachbuilder and foundry model workshop, which in 1989 became STOLA s.p.a..
Maintaining the memories also through the lives of my Father, Uncles Giuseppe and Roberto, my Cousin Massimo, the executives, the workshop leaders and all the employees I have met, I will describe the contributions they all made.
From as far back as 1919 to 26 July 2004, the day I left the presidency and every operational position in STOLA spa, and then from 2005 to 2019, founding STUDIOTORINO srl, this century of people, projects and places will be retold so that the memories are not lost.
Part of this narrative will also include the three companies 100% owned by Stola s.p.a. : Estival, Tecnocars and Stola do Brasil.
This story is dedicated to my father Francesco, whose life was taken away by evil, cowardly men at the age of 49. 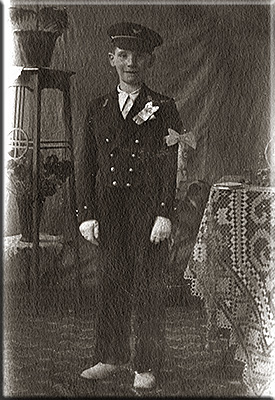 Alfredo Stola was born in the family home in Via Casal Borgone 1, in the Madonna del Pilone neighbourhood on the banks of the river Po ,Turin, on the 31st August 1894. He was the first born, later joined by his sisters Gabriella and Adelina.
His father Francesco and his mother, Vincenza Brunazzo, were traders with a thriving business in the sale of the wines and liqueurs of Asti and Monferrato.
In Corso Casale 62, on the corner of Via Casal Borgone 1 within the family property, they had an important and profitable retail outlet called "Emporio Vini Stola Francesco" managing a retail and wholesale business for northern Italy founded in 1875.

The young Alfredo however, proved much more interested in the motor car and its technology, his parents encouraged him by offering him the opportunity to undertake technical studies.
So, after graduating from middle school, encouraged by his parents, he undertakes technical studies and at eighteen years of age, not without a good dose of courage, he decides to leave Italy for Brazil. 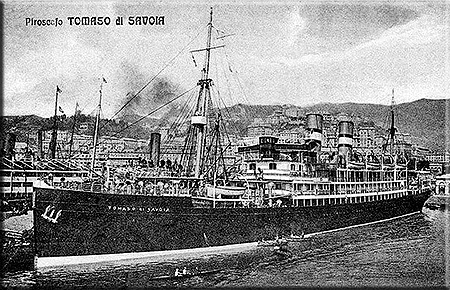 There are no photos taken by Alfredo during his time in South America. Everything was told by him to his three children, and consequently to his grandchildren. So we wanted to imagine through these two postcards found on the web his ocean crossing, and a Sunday walk in the center of Santos. 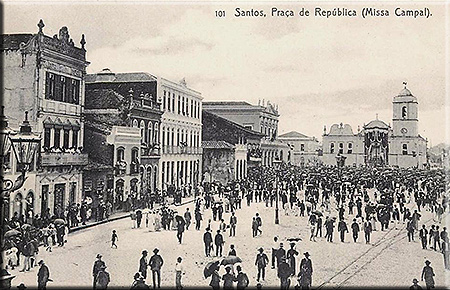 In these vintage photographs you can see the motor ship Tomaso di Savoia at the port of Genoa in those years often used on the Genoa - Buenos Aires - Santos route, and a suggestive image of the center of Santos in the last century, probably on a day of celebration. 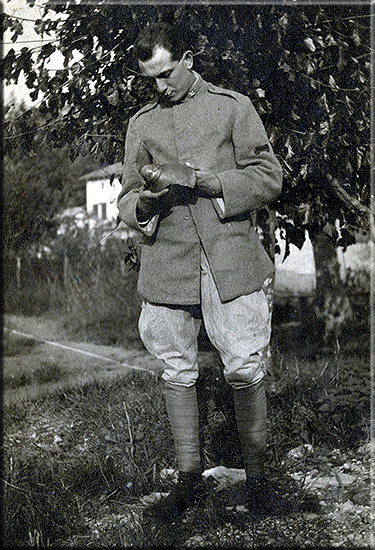 1915, fraction Isola di Morosini in the province of Gorizia. Alfredo Stola infantryman of the Italian army at the beginning of the First World War.In the autumn of 1912 he embarked from Genoa, his destination Santos, a city with the largest port in South America and very close to Sao Paulo.
As with many Italian emigrants arriving in Brazil, after nine days sailing the young Alfredo met his father’s Italian contact who had placed him in work.
The job was as a foundry apprentice modeler in the field of large marine engines, here he stood out for his natural ability to work with wood, following technical drawings and learning the sand casting processes.
It was this experience, gained in the environment of motorized transport, that a few years later would allow him to take his first steps in the fervent Turin automotive industry.
With the military call, Alfredo returned to Italy in 1915 to participate in the First World War, and enlisted in infantry he would be positioned at the front near the Isonzo river in the Isola di Morosini area. 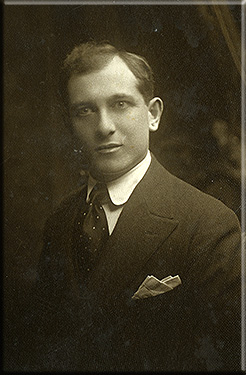 The choice of area was deliberate, it was in the heart of Borgo San Paolo, the location of the headquarters of Lancia, which was then one of the most important Italian car factories, renowned throughout the world.
On an area of just over 300 square meters, his team was composed of four collaborators: Carandino, Moiso, Pronel and the apprentice, Cit.
The company was named "ALFREDO STOLA MODELLI DIMOSTRATIVI IN LEGNO PER FONDERIA E CARROZZERIA" ("ALFREDO STOLA DEMONSTRATIVE MODELS IN WOOD FOR FOUNDRY AND BODYWORK") the graphic design for the company logo was penned personally by Alfredo. 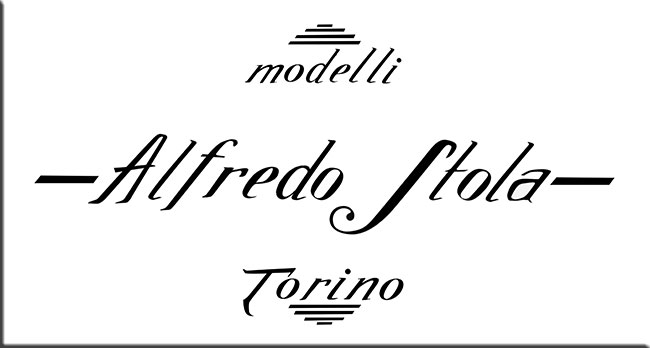 The first graphic design of the modelshop created by Alfredo Stola 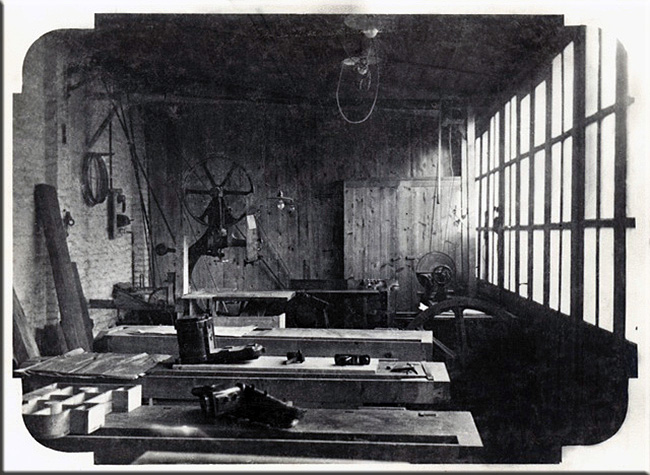 Torino 1919 Inside the model shop of Alfredo Stola in Corso Racconigi 138.

Being less than a kilometer from the Lancia factory, the small workshop was immediately appreciated by the car maker, not only for models but also for the prototype panels assembled on demonstration bucks, some of which were drivable. In the meantime, a sincere relationship of mutual respect was being established between Alfredo Stola and Vincenzo Lancia.
It was at this first location that various demonstration models for exterior bodywork and interiors were being built. Also, castings for Lambda engine parts, to be put into production from 1921 onwards. 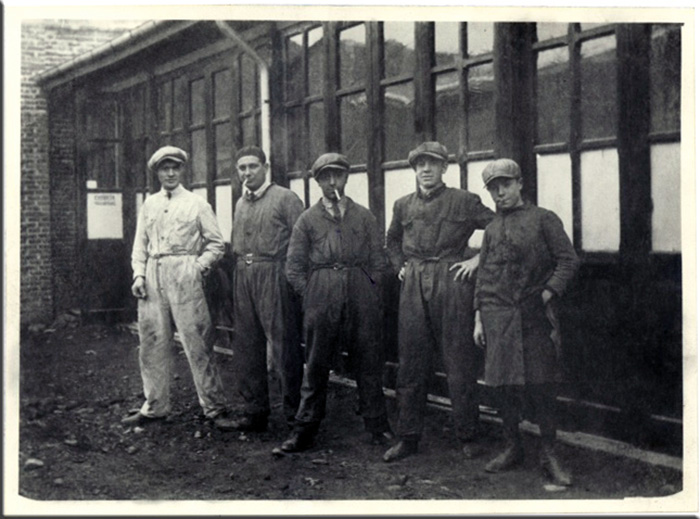 Turin, corso Racconigi 138. part of the Alfredo Stola modelling team from the end 1920's.
From the left-Corandino, Alfredo Stola, Moiso, Pronel and Cit. 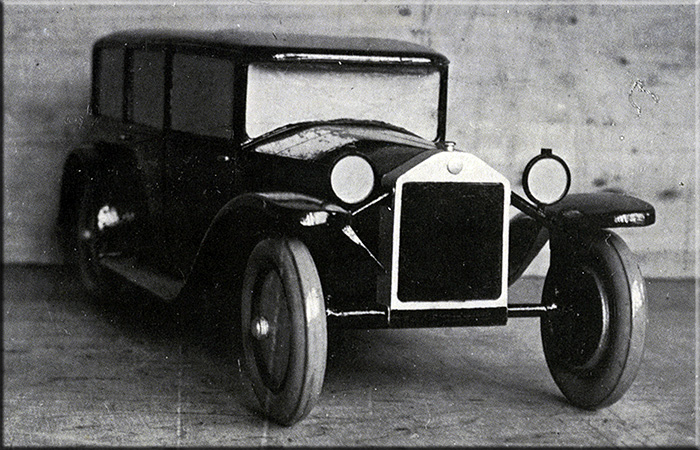 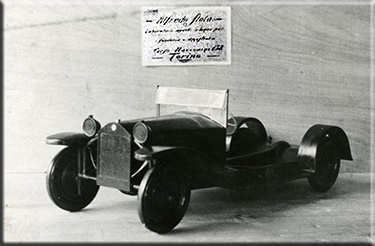 1921 model of the Lancia Lambda chassis. It is interesting to note the hand-written sign, that can be read with difficulty, showing the company name and the address of the modeling shop. 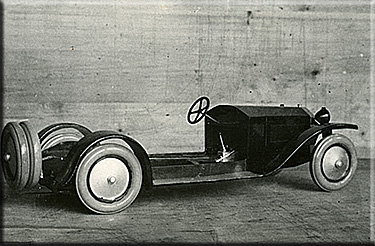 1921 model of the Lancia Lambda chassis. 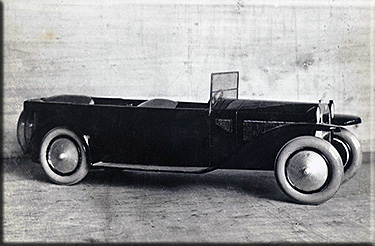 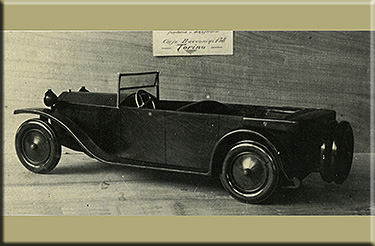 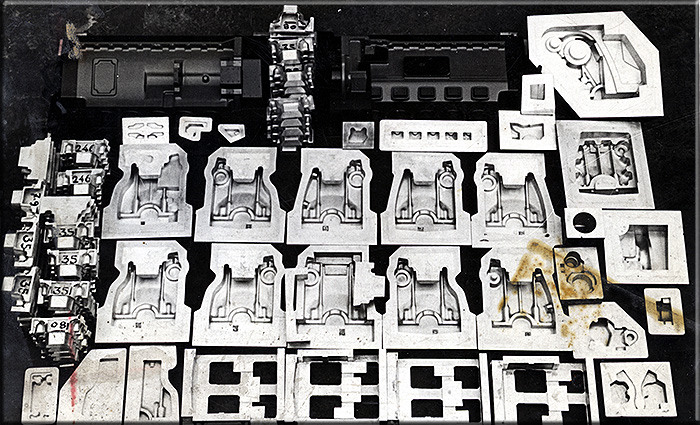 1920 Complete design of the foundry models for the Lancia Lambda engine. 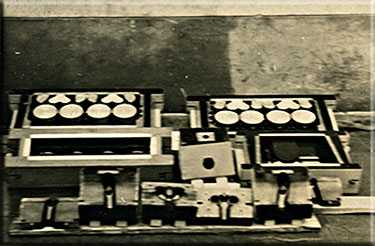 1929 of the foundry models for the Lancia Astura engine.Other work followed for the Dilambda and Augusta models ; the Artena in 1933 would become the last project delivered from the Corso Racconigi site.
The details of this last project being a "restyling" as we would call it today.
New style wooden running boards and mud-guards were fitted to the previous production model; in this way a kind of running model / prototype was realised. 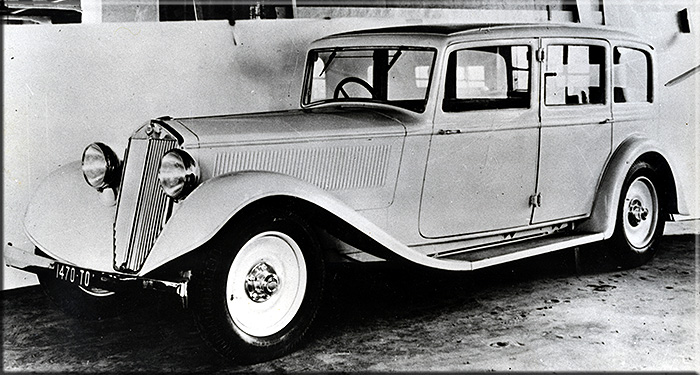 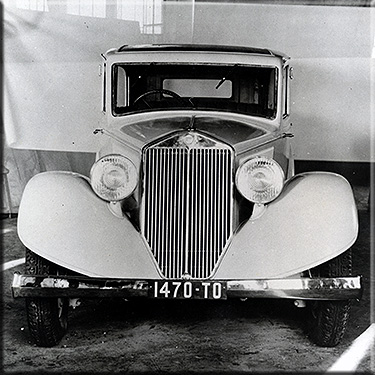 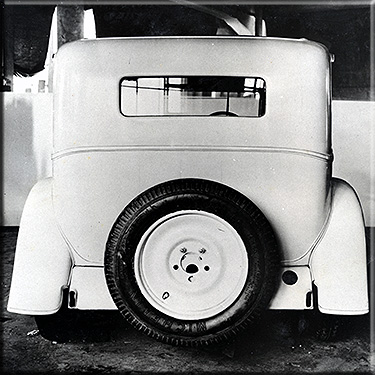 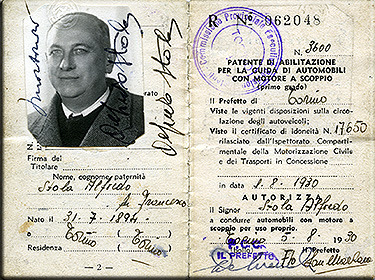 In 1934, the works moved a few hundred meters, to Via Issiglio 38, bordering the wall of the large Lancia factory in Via Monginevro. 800 square meters of workshop owned, designed and built under the direction of Alfredo.
It was complete with diverse work areas, cast iron countertops, a column milling machine, accounting support offices and a headcount of around 20 employees. 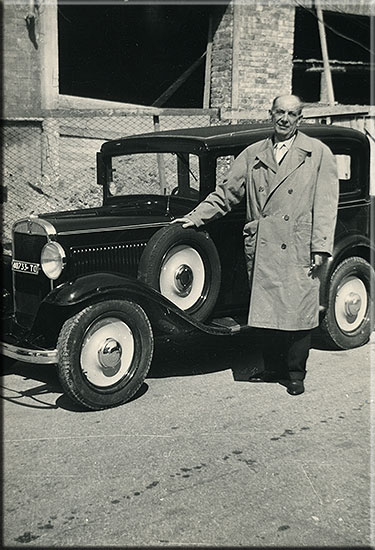 Turin, 1932, via Issiglio 38, Alfredo Stola with his Fiat 514 TO 37145, on the site of his new workshop.For "Stola Modelling", The wall of the Lancia plant in Via Issiglio would become a legend within in the workplace, when Vincenzo Lancia himself, opened a connecting gate right in front in order to speed up movement between the companies.
A saving of almost a kilometer for the movement of the models that, at the time, were pushed by hand on a cart.
With the new gate across the street, it allowed direct access to the Lancia courtyard without having to go through Lancia's goods reception in Via Caraglio.
"Aprilia" and "Ardea" were the model names of the period. Alfredo Stola designed the first wooden maquettes for interiors and exteriors on the same buck for these models.
The aim, to understand both style and habitability together, given the unusually daring aerodynamics for the time. 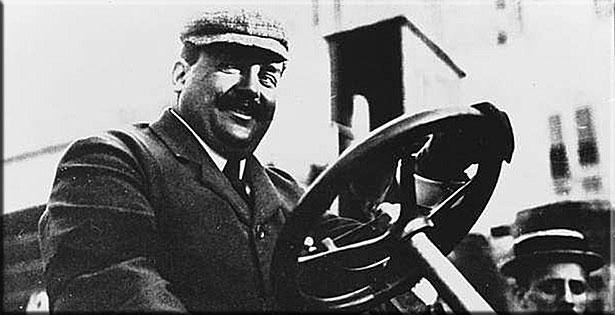 Vincezo Lancia poses in front of his premises in Borgo San Paolo. In 1936 he will open a door driveway in front of the street of Via Issiglio 38 corresponding to the model shop of Alfredo Stola. 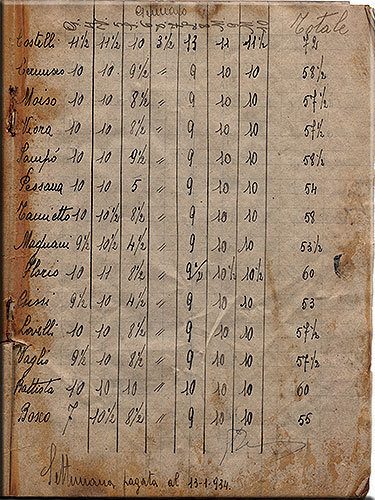 Vincenzo Lancia, in the search for totally new streamlined forms, found in the laboratory of Alfredo Stola, the ideal partner who also had the capability to create prototype bodywork in both sheet metal and, in the early stages, wood.
Looking at the archive photographs, it is surprising to see how, at the time, car models were built with thin wood, hollow on the inside to make the habitability and ergonomics immediately verifiable.
These are very profitable years for the Italian automotive industry and the "Alfredo Stola" company would soon become a benchmark for its expertise, not only for Lancia but also for the other Italian car manufacturers, such as Fiat, OM, Diatto, Farina, SPA. Lancia. 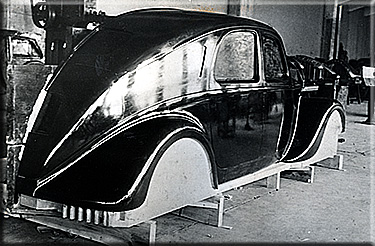 Turin 1934. Interior and exterior wooden models for the Lancia Aprilia 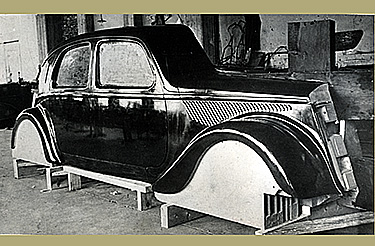 Turin 1934. Interior and exterior wooden models for the Lancia Aprilia In effect it was a half model, with the interior visible from one side Unfortunately there are no photographs, but this was described to Alfredo Stola by his father. 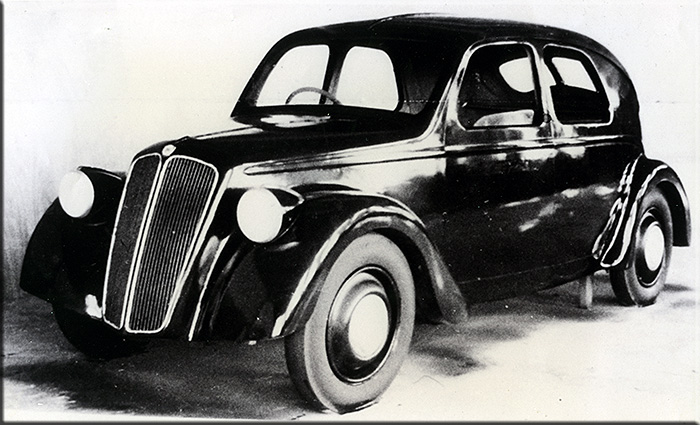 1934, a 1:1 scale model of one of the proposals showing both interior and exterior together It is conceivable that it also had the doors open, as shown by the steering wheel and the window not being completely lowered. 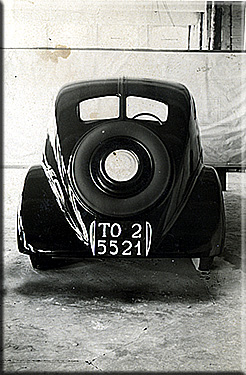 The license plates shown were those of Alfredo Stola's personal Lancia Augusta. 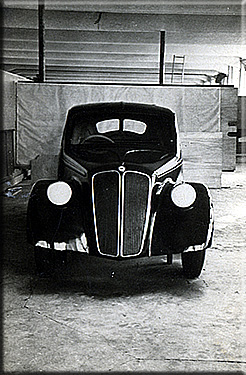 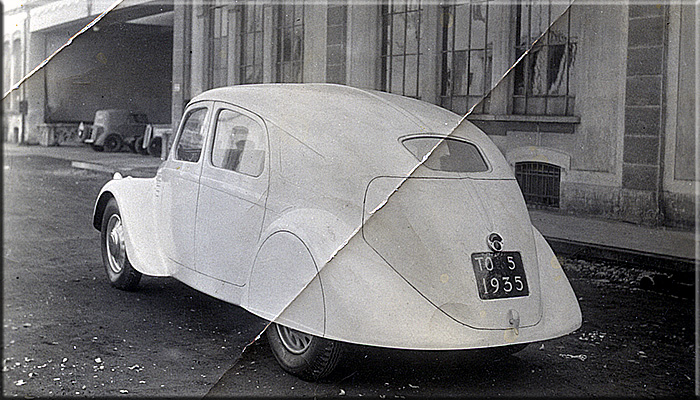 1935,Taken in the courtyard of Lancia,38 via Issiglio, one of numerous aerodynamic prototypes requested by Vincenzo Lancia. From the number plate this appears to be the fifth proposal model of 1935. 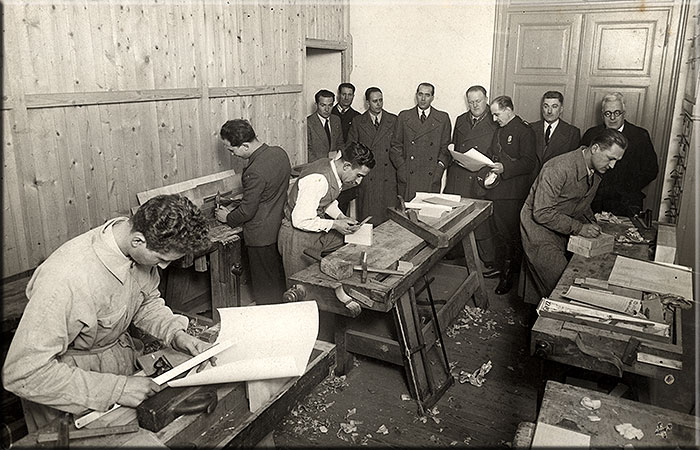 1938, Avogadro Technical Institute of Turin, Giuseppe Stola, the first on the left, at the fourth year practical exam.