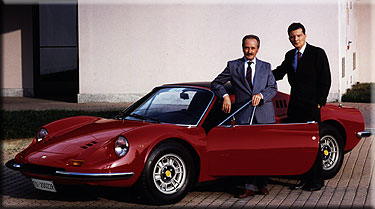 Aldo Brovarone and Alfredo Stola
with a Dino Ferrari GTS (1989)

STUDIOTORINO is proud to have Aldo Brovarone among its best friends.

It is my wish to honor this friendship that dates back to 1989 by placing a spotlight on this extraordinary man on this site. Please meet one of the greatest car stylists in the industry.
Aldo Brovarone, whose name can be associated with prestigious brands such as Cisitalia and Pininfarina is, I must mention, first and foremost a kind and generous man who possess the rare gift of modesty. 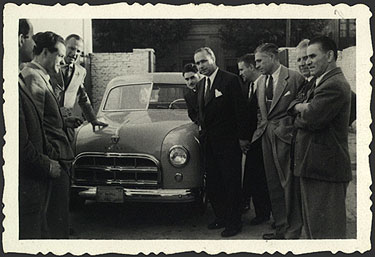 Born in Vigliano Biellese, Piedmont, on June 24, 1926, Aldo demonstrated an extraordinary artistic talent as of an early age. The professional studies he took on as a young man were particularly useful in his part of the country where a thriving textile industry offered good chances of employment.
Having completed his studies, Aldo takes on a graphic designer job at an advertising firm in Buenos Aires, Argentina in 1949. He is then offered the opportunity to enter the automobile world by AUTOAR (Automotores Argentinos), founded and directed by Piero Dusio, founder of Cisitalia in Torino. 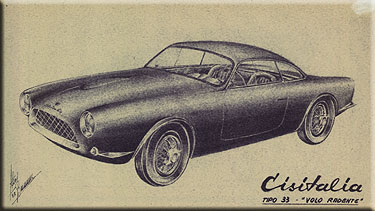 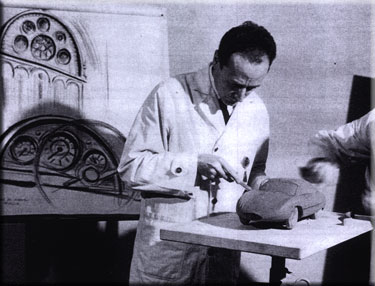 Aldo Brovarone is modelling a Ferrari. 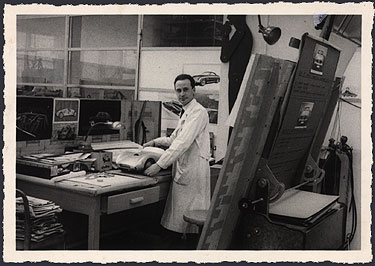 Aldo Brovarone sitting at his desk in the Pininfarina building in Grugliasco. 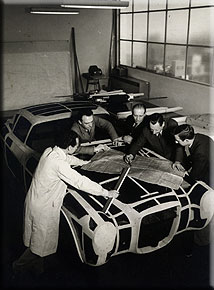 Aldo Brovarone sitting at his desk in the Pininfarina building in Grugliasco.After a trial period, Brovarone's position is confirmed as assistant stylist to Francesco Salomone and Franco Martinengo exposing him first hand to a prestigious work environment

At that time Pininfarina designs extraordinary cars and Brovarone begins to personally contribute to the creation of these vehicles through detailing and sometimes coloring the sketches created my his mentors.

Outstanding projects of this period are the Maserati A6 GCS, the Ferrari 250 Le Mans, the famous single specimen Ferrari model built exclusively for the film director Roberto Rossellini, and the Alfa Romeo Superflow.
One of his sketches is chosen for the first time for the creation of a single off-set model built from a Ferrari 375 America for Gianni Agnelli.
Before being put into production, every job was personally supervised and corrected by Giovanni “Pinin” Battista. 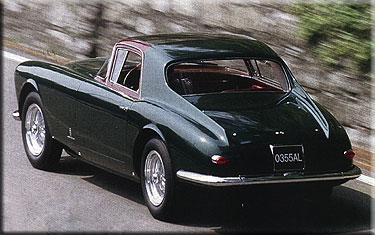 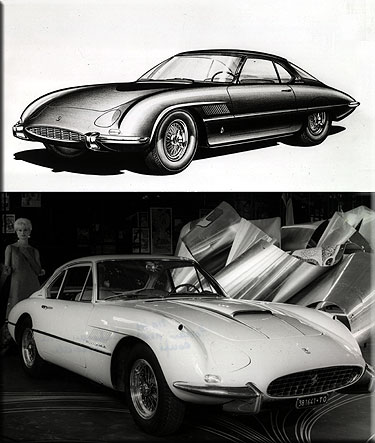 Ferrari SuperAmerica 2, sketch and prototype .After about eight years as assistant stylist, Brovarone takes on a leading role in the designing of the Ferrari Superamerica superfast 2. It is his design and prototype that is presented at the Pininfarina stand at the 1960 Automobile Show in Torino.
This experimental creation by the re-known Turin bodybuilder presents a new and innovative style. The design has some points in common with the wing of an airplane (one of Brovarone's passions). The leading edge is the front end of the car where the air intake for the radiator is located. It's shape is that of a small ellipse reminiscent of the Ferrari sports models. The trailing edge is the back end of the car with a pointed tail towards which the curves of the car body converge.
In order to render the purest design possible, an innovative idea at that time, Brovarone hides the front headlights completely under an aluminum cover activated by an electric command.
In his book titled “Le Granturismo” published in 1980, Antoine Prunet writes of Brovarone's design: “This remarkable coupe' can certainly be considered, both for its style and for its technical characteristics, one of the most outstanding examples of the craft of building car bodies.” 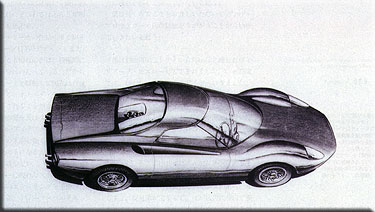 The first sketch of the Dino ( It is very interesting the middle engine solution).

The DINO Berlinetta Speciale, presented in Paris, in 1965 at the Pininfarina stand was also designed by Brovarone. This prototype may be considered the last prototype seen by the founder of Pininfarina and was then one of the first models to be carried on by his son Sergio. 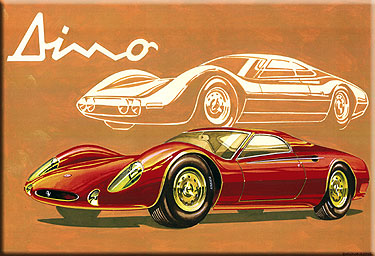 It was another revolutionary design, the first prototype of a new generation of Ferrari middle engine . This design has since inspired many Ferrari central engine models and gave birth to the 206 and 246 Dino generation road versions. 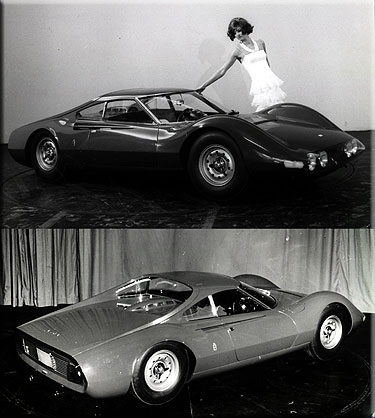 The Dino prototype before leaving for the Paris Motor show in 1965.This Berlinetta speciale prototype originates from a lenticular form to which the wheel streamlining and the roof are attached.
The front hood is thin, with a raised profile in which two pairs of headlights are placed in the air intake.
The side, with a pronounced dihedral, opens towards the base of the rear fender where a gouge is at the base of the air intake for the cooling of the engine and the power feed.
The design around the wheels is very pronounced and is reminiscent of the famous modern P2 and P3 models. 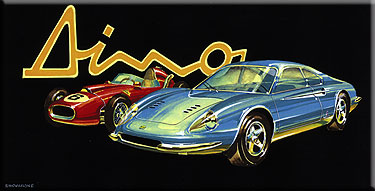 Another distinguishing and innovative feature is the rear end of the car where the rear window is vertical and concave with two lateral fins as a frame which then continue on to the tail. 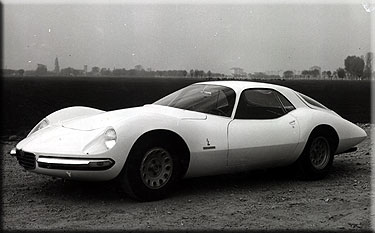 Also in 1965 Brovarone designs the tubular shaped Giulia sport consolidating a period of intense creativity both personally and for the firm.
Brovarone's last design prototype was presented at the Torino Automobile Show in 1975.
The model designed for Pininfarina was the Alfetta based Alfa Romeo Eagle.
In the series-built car field Aldo Brovarone participated in the design of the Peugeot 504 and the stunning Lancia Gamma Coupé. 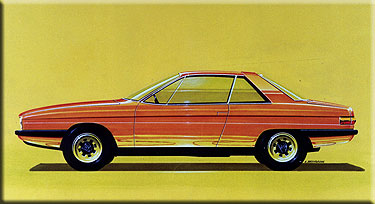 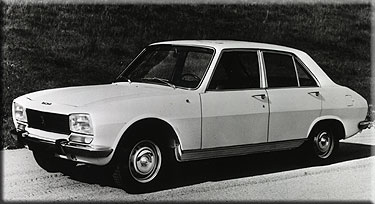 In 1988 Brovarone retires yet continues to draw and to create fantastic cards with airplane and antique car illustrations.
It is during this period that I had the pleasure of meeting Aldo through Leonardo Fioravanti. Since then, our friendship has grown and strengthened. 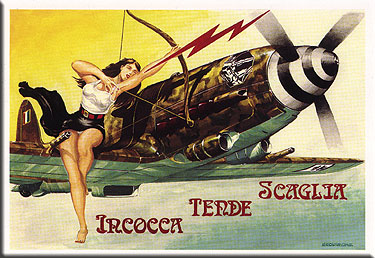 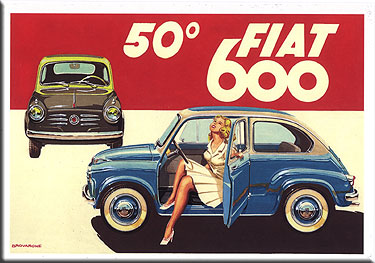 In 1996, when “Stola Spa” was a family company, my uncle Roberto and I decided to present at the Torino Automobile Show our first prototype inspired by the Fiat Barchetta. Our prototype named “Fiat Dedica” was presented as a tribute and with gratitude to the trust Fiat had bestowed upon us by commissioning us with the project.
And so, I asked my friend Aldo if he would be willing to work for us. I still remember his unexpected reply: “Dear Mr. Stola, I'm retired. I can't and I won't take on any consulting work. If you like though, I can draw you some sketches –but just as a hobby. It will help keep me in shape.”
I want to to point out this episode in order to demonstrate Aldo's honesty and generosity, as I mentioned earlier. 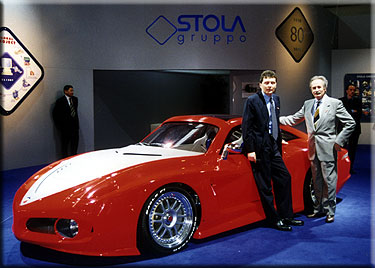 Brovarone and Alfredo with the Stola Abarth Monotipo. Torino Motor Show 1998.In 1988 Aldo Brovarone designed for me some sketches for the Abarth Monotipo; in 2000 for the S.82 and in 2002 for the GTS.
In Autumn 2004 when I informed Aldo that I had left the family company and that I had founded STUDIOTORINO, he again generously offered me his talent and contributed to the design of the RK Spyder presented by STUDIOTORINO June 16, 2005 at the Automobile Museum of Torino. 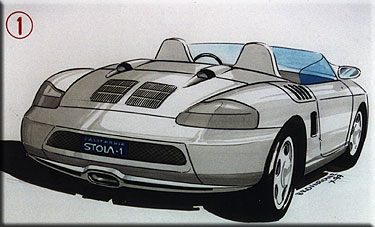 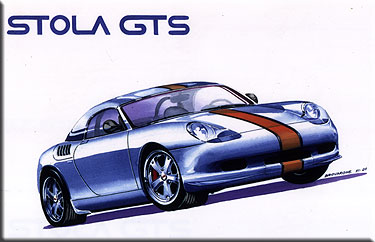 Final drawing of the Stola GTS in 2002

Please allow me to add another curious anecdote.
During a telephone conversation in September 2005, Aldo Brovarone invited me to his house. When I arrived, waiting for me was an unexpected surprise: two breathtaking sketches of the Coupé version of the RK Spyder launched a few months earlier.
I had not planned to create a Coupé version of the RK Spyder, but after having seen the models so well designed by my friend, I decided to take on this new project ….. in the spring of 2006. 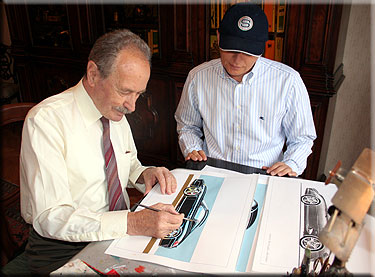 Brovarone and the sketches for the new Coupé.To share on this site Aldo's history, to describe his professional contribution to Cisitalia and Pininfarina, and to point out the time he has dedicated to me is a way for me to thank him yet again.
I want that the visitors of www.studiotorino.com to meet a man with a kind spirit and rare virtues and a great passion for beautiful automobiles.

Photos from the personal collection of Aldo Brovarone